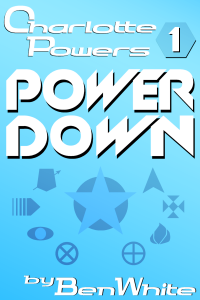 There's a problem, though. Not with her powers; she has super strength and super agility and phase-shifting, which is unusual because nobody else has ever gotten more than one power. The problem is that her parents don't think she's ready for the world—or that the world is ready for her.

So instead of going adventuring she's sent to a nice, normal school, ostensibly to establish a Public Identity.

There are currently seven books in the series: Power Down, Power Play, Hidden Power, Rising Power and Power Overwhelming all take the form of Charlotte's journal, then One Girl Army shifts to third person, after which Neon Bug City swaps to both first person AND a change in protagonist. The upcoming Only Ever Whisper will apparently have yet another protagonist swap.

Oh, and they're by BJK White.