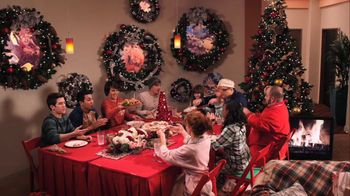 Having a holiday meal with "borrowed" Christmas decorations.
Advertisement: