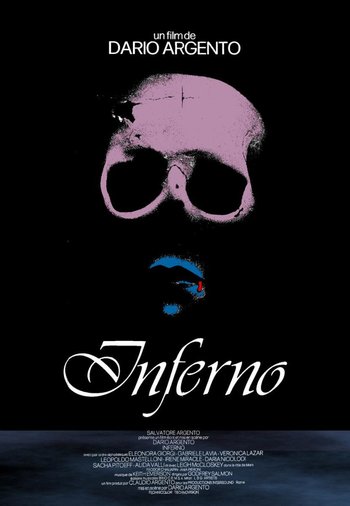 "Very soon now, everything around you will become dark, and someone will take your hand."

A 1980 Italian horror film by Dario Argento, not to be confused with Dante's poem or the novel and film of the same name.

Rose Elliot, a poetess living in New York City, purchases a book from a local antiques dealer. Written by an alchemist known as Varelli, the book explains how the author was commissioned by three evil (and very powerful) witches to construct stately mansions for them, from which they rule over the world with insanity, grief and despair. Realizing that the apartment she now resides in might be the home of Mater Tenebrarum, the Mother of Darkness, Rose writes to her brother Mark, currently studying music in Rome, to warn him of her fears.

Mark returns to New York, and finds that Rose has vanished. Taking up residence in her apartment, Mark tries to piece together the whereabouts of his sister, only to discover that her initial fears were horribly correct.

The second film in a loose trilogy (between Suspiria and Mother of Tears), in terms of storytelling Inferno is the most alien of the three. While Suspiria walked a thin line between murder mystery and surreal horror, Inferno dispenses with any sort of narrative structure, instead running on a dream logic that makes no concessions to reality.