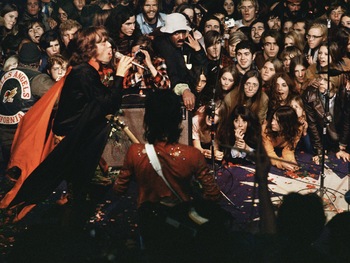 "People, who's fighting and what for?"
— Mick Jagger
Advertisement:

Gimme Shelter is a 1970 Rockumentary and Concert Film documenting the 1969 American tour by The Rolling Stones, then hitting their peak as artists. It was shot by Albert and David Maysles and directed by the Maysles brothers and Charlotte Zwerin. The film is named after a song from the Stones' 1969 album Let It Bleed.

The film was originally supposed to be a straightforward documentary of the Stones on their 1969 American tour, which was to culminate with a free concert held at the Altamont Speedway in California on December 6, 1969, featuring the Stones as co-headliners with The Grateful Dead and such supporting acts as Santana, Jefferson Airplane, The Flying Burrito Brothers, and Crosby, Stills, Nash & Young.

The free concert, which was anticipated by many as a West Coast answer to that summer's Woodstock festival, was originally supposed to be held at San Jose State University; then, after they backed out, in Golden Gate Park in San Francisco; but there were conflicts with authorities and a previously-scheduled football game there. The show was then moved to the Sears Point Raceway in Sonoma County, but financial conflicts with the raceway owners prompted one final location change just 24 hours before the event, to the Altamont Speedway, a much smaller and more remote venue on the outskirts of Alameda County. This last-minute planning led to 300,000 people descending upon a barren, unfriendly environment with an extremely small stage (designed for earlier venues where it would have been up on a hill or platform) placed at the bottom of a hill. With gravity pulling people down the incline, they ended up in a mass crush against the stage.

Altamont was not intended as a concert venue. Hell's Angel Bill Fritsch called it "A goddamn fucking bereft pasture in the middle of nothing," and his fellow Angel Willie Tumbleweed said "Couple wire fences, cow shit, not even a barn." There were no facilities to support a massive crowd — too few toilets, bare minimum first aid, very little in the way of medical staff, nothing. Also no security, which led the Rolling Stones' tour manager Sam Cutler to hire the Hell's Angels biker gang for security around the stage. The story goes that the Angels were recommended to the Stones by the Grateful Dead, who had used the relatively well-behaved San Francisco chapter to do security at concerts with no incident. Security at Altamont, however, was instead largely provided by members of the Oakland chapter, which had a more violent reputation. While the Angels warned they were not really security guards, they agreed to simply keep people away from the stage and the equipment, and perhaps stop fights or give directions. They were paid with $500 worth of beer.note That would be almost $4,000 in today's money.

Just to repeat, the Stones' tour manager hired a biker gang for security, and paid them with beer.

The result was a disaster. While things started out fairly well, with a desire to recreate the legendary "peace and music" Woodstock vibe, the concert eventually descended into chaos and violence. Part of this was due to the lack of crowd control. Performers and attendees later described a very strange, and even nasty, ambience that was the opposite of Woodstock, with a sense that everyone was impatient to have the full Woodstock experience crammed into a single day. They were in a hurry to get to the concert site, get high on whatever drugs happened to be available, then watch the show, with the hopes that the other 300,000 people at the show would just stay out of their way and leave them alone. At Woodstock, security had been provided by a gentle "Please Force" (please do this, please don't do that) led by professional Non-Ironic Clown and Merry Prankster Wavy Gravy. At Altamont, it was the Hell's Angels, a biker gang, who were soon heavily liquored up. They have a hard and fast rule about anyone touching an Angel's bike without permission, and apparently a bike got knocked over in the crowd crush and the Angels began beating people with weighted pool cues. They were soon beating anyone at random. They didn't stop with audience members; Jefferson Airplane lead vocalist Marty Balin was knocked unconscious, as shown in the film.note Grace Slick remembers the Angels beating one of the Airplane's crew people and Balin trying to stop them. The Angels piled onto Balin because he said "Fuck you!" The Angels said "No one says 'fuck you' to an Angel," so Balin repeated it. Balin himself remembers jumping off the stage and yelling at the Angels to stop, then slugging one of them himself Mick Jagger himself had been punched in the face by a random stranger (also shown in the film) as the Stones arrived.note Balin and Jagger weren't even the only musicians who were injured at Altamont; Ace of Cups singer Denise Kaufman-Jewkes, who was pregnant at the time, was hit in the head by a full bottle of beer thrown by one of the Angels. The injury fractured her skull and required emergency surgery.

Further fueling the hostilities, the Stones delayed their part of the show until well after dark. Many had waited over 24 hours to hear them and reacted with impatience and anger. Additionally, the Grateful Dead, who had co-planned the whole show and were supposed to co-headline with the Stones, were stunned by the violence at the festival when they arrivednote Jerry Garcia had a flat-out panic attack and split the scene as soon as they were informed of what happened to Balin. The lack of the Dead caused a large hole in the concert lineup, which made concertgoers even more agitated. Angels Willie Tumbleweed and Bill Fritsch warned the Stones backstage that their delaying tactics would cause the crowd to "blow beyond sanity" and that people would die. They finally had to force the band out onto the stage.

The concert, and the film, were made infamous when an 18-year-old man named Meredith Hunter pulled a gun, and was promptly stabbed to death by a Hell's Angel, not more than 15 feet from the stage. This act of violence was captured on camera and is shown in the film.

The Altamont concert may have been conceived as a "Woodstock West", but instead wound up being cited as a cultural landmark heralding the death of The '60s and the counter-culture.note Involving actual death as well. Besides Hunter there were three other deaths at the concert: two people struck in a hit-and-run accident by a culprit who was never identified, and a young LSD-addled man (ironically from upstate New York, the location of Woodstock) who made an ill-advised attempt to swim in a large aqueduct adjacent to the raceway Besides its cultural implications, the film is also one hell of a rockumentary, featuring the Stones at their peak, as well as performances by Jefferson Airplane, Ike and Tina Turner, and the Flying Burrito Brothers.note While Santana and CSNY also performed at Altamont, neither appeared in the film for contractual reasons. Prior to Altamont, the Stones are shown recording "Wild Horses" and "Brown Sugar" at a studio in Muscle Shoals, Alabama; both songs would subsequently be included on their classic Sticky Fingers album. George Lucas was a cameraman at Altamont; his camera jammed and none of his footage made it in the film. This film helped make the Maysles brothers famous; they went on to direct several more "direct cinema" documentaries, like the iconic Grey Gardens.

the following day; and in this article about the events

and this article about the trial

from Rolling Stone magazine, and this article by David Curry

. Saul Austerlitz's book Just A Shot Away provides an in-depth analysis, including a 2015 interview with Hunter's sister, contextualizing his death in light of more recent scandalous murders of black men. Joel Selvin's book Altamont: The Rolling Stones, the Hells Angels, and the Inside Story of Rock's Darkest Day is also worth a read. There are more details in Gatz Hjortsberg's Jubilee Hitchhiker, his massive biography of Richard Brautigan.note Both were there with families and friends, but too far away to see any violence, and left early. Brautigan, a friend of the San Francisco Angels, believed Meredith's killing was justified to stop him shooting Jagger. Negativland's Don Joyce covered Altamont in sound collage form in chapter 36 of 'How Radio Was Done'