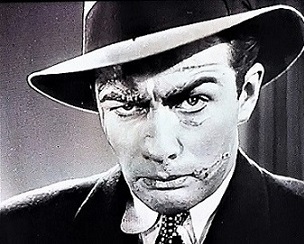 Buried Loot is a 1935 short film (19 minutes) directed by George B. Seitz. It is the first film in MGM's "Crime Does Not Pay" short film series, which ran for fifty films over twelve years.

The "MGM Reporter" (an actor) introduces one Edward Swain of the International Bonding Company (another actor) who has a story to tell. The criminal in this short is Al Douglas (Robert Taylor), who has embezzled $200,000 in 1935 money from the bank where he works. Al turns himself in, telling his boss that he gambled all the money away. He is then sentenced to 5-10 years in prison.

But that's not all! It turns out that Al did not gamble the money away; he buried it in a field in New Jersey. Al's plan is to serve his time, get out after five years with good behavior, then go back and dig up his money away from the prying eye of the law. But his cellmate, Louie, a nervous type who chafes at confinement, talks Al into an escape. Al and Louie dress up like a couple of civilians and stroll right out the front door of the jail. Al then digs up his money, but naturally, things do not go smoothly.