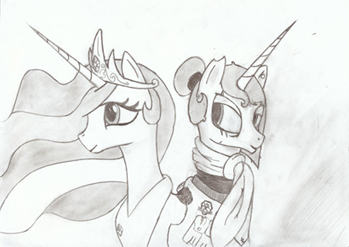 The Zone really changes you...

Fourteen Months Celestia has been in the Chernobyl Exclusion Zone.
S.T.A.L.K.E.R.s say that the Zone changes who you are... that's partially true. The truth is as horrific as it is simple: the weak die, the strong grow stronger.
Celestia wasn't weak to begin with. She became stronger. She changed. Can she still fit in her homeworld?

Operation Homecoming is a My Little Pony: Friendship Is Magic / S.T.A.L.K.E.R. crossover and direct sequel to See The Zone And Survive.

After fourteen, adventurous but also hard, months Celestia, together with her new friends, allies and her lover, finally returned to Equestria. But this is not the end of the challenges that she must face. Now, not only Equestria must adapt to their old-new ruler but also Celestia must adapt to a few changes that have occurred during her absence.

Fanfic can be read here

Page picture originally made by author of the story

and used by him as a fanfic's covert art.

See The Zone And Survive contains examples of: