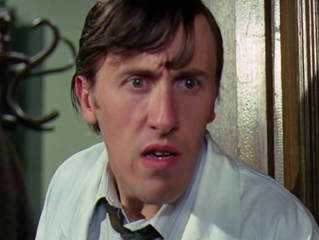 David Battley (1935-2003) was a British actor who specialized in concise and gloomy roles. He was one of the most known (or, at least, most familiar) deadpan snarkers of his time, even though he never had any noteworthy leading roles. (He was, however, much in demand as a character actor and comic stooge.)

His TV work ranged from the satire show BBC 3 to the military police drama Redcap to The Good Life and later The Bill, Lovejoy and Mr. Bean in a busy career. (Seriously, take a look at his IMDB page

.) His most famous parts were as Ergo the Magnificent in Krull, Mr. Turkentine in Willy Wonka & the Chocolate Factory, and various parts (including Stig O'Hara in the original four Rutles!) in Rutland Weekend Television.

He was the father of actress Zoe S. Battley, and died of a heart attack in 2003. He was about five foot eight, and one hell of a juggler.