A character sheet for the video games in the Prince of Persia: Sands Of Time Saga, most of which are recurring, or mentioned throughout the games in the same continuity.

Those looking for the 2008 Prince of Persia character sheet can find it here, while characters of the Sands of Time film adaptation can be found here.

open/close all folders
Advertisement:
The Prince 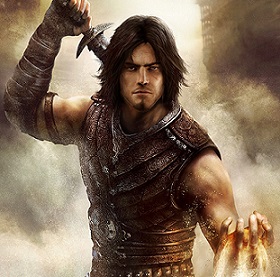 Click here to see him from the first game 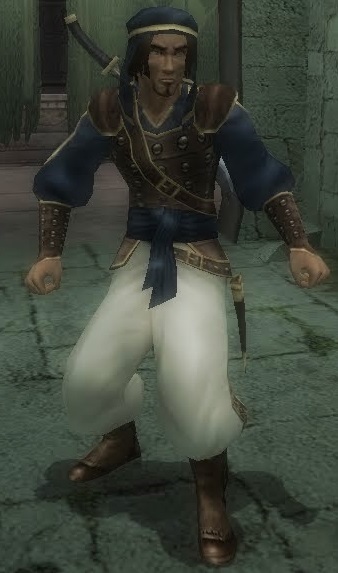 The main hero of the saga, seen in all the games. A just and honorable warrior prince who wields the powers of the Dagger of Time and the Medallion of Time.

The Sands of Time 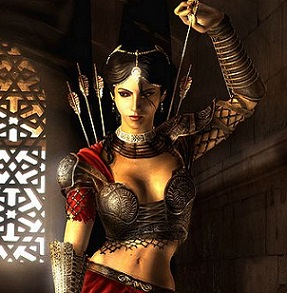 Voiced by: Joanna Wasick (The Sands of Time), Helen King (The Two Thrones)

The daughter of the Mahrajah, brought to Azad along with the relics of Time. She ends up fighting side to side with the Prince. Wields a bow. 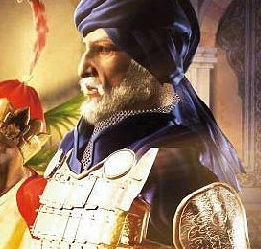 Voiced by: Warren Burton (The Sands of Time)

The Prince's father, depicted as a just and merciful ruler. In the first game, he conquers the Maharajah's kingdom with the Vizier's help and takes the Sands of Time as a gift for the Sultan of Azad. When the Prince releases the Sands, Shahraman is turned into a monster and later killed by his own son yet brought back to life through the Grand Rewind. Before the events of the second game, the Prince becomes drifted from him due to being chased by the Dahaka. In the third game, he is sadly killed by the Vizier during the assault on Babylon and is never resurrected afterwards. 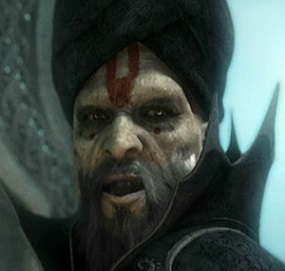 Voiced by: Barry Dennen (The Sands of Time), Harry Standjofski (The Two Thrones)

The main villain of the first and third game, bent on using the powers of the Sands of Time in order to Take Over the World. Specifically, in the third game he kills Kaileena and is mutated into a creature called Zurvan, the God of Time, but is eventually slain by the Prince. 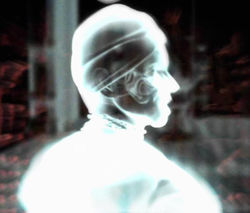 Farah and Kalim's father and the ruler of India. Prior to the events of the game, he journeyed to the Island of Time in search of its artifacts. While satisfied with what he found, the Vizier betrays him in both timelines, offing him with the intention of using the time artifacts to gain absolute power. 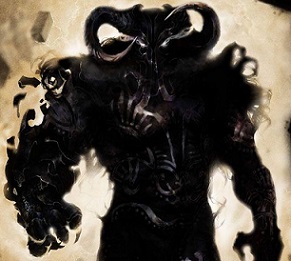 A dark entity, whose task is to preserve the timeline. When the Prince used the sands of time to save his skin, the Dahaka awakened, and soon went after him to make sure that he was erased from the timeline. 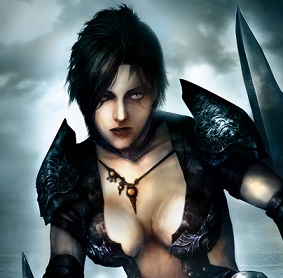 A mysterious, half-naked woman in black who works for the Empress of Time and fights the Prince as he tries to reach the Island of Time.

Kaileena The Empress of Time 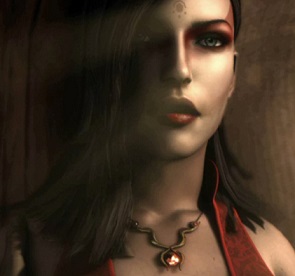 A beautiful and mysterious lady in red met on the Island of Time, who helps the Prince. She's actually the Empress of Time and believes killing the Prince will change her fate. Her destiny is to to die at the Prince's hands and upon her death release the Sands of Time into the world. In the true ending, the Prince manages to save them both from their fates and takes her with him. In The Two Thrones, which she narrates, the Vizier murders her in order to release the Sands in Babylon. 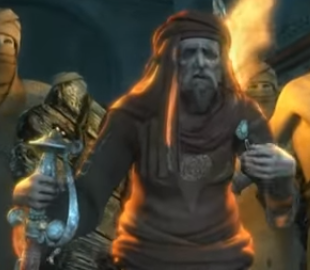 A wise old hermit who has looked after the Prince since he was a child. He possesses vast knowledge about the Sands of Time, the Island of Time, the Empress of Time and the Dahaka. The Prince seeks his counsel in regards to the Dahaka's reason to hunt him down. Learning that he has to die because he altered the past with the Sands of Time in the previous game, the Prince sets out to the Island of Time with the Old Man's warning that he cannot change his fate. In The Two Thrones, the Old Man leads the oppressed people of Babylon to attack the Vizier's forces in order to give the Prince and Farah a chance to find the Vizier and finish him. 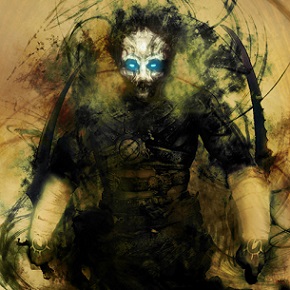 A mysterious dark humanoid creature. It wears a strange mask and has seemingly has some interest in the Prince. Its intentions do not seem positive. It is later revealed to be the Prince wearing a mask capable of allowing two versions of himself to exist in the same timeline. 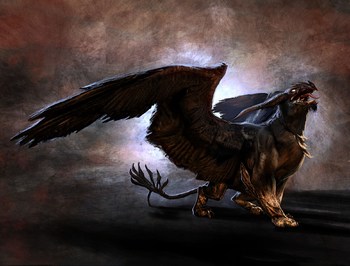 A sand creature with unknown origins, Kaileena has put it to use guarding the Island of Time. Serves as a boss mid to late game. 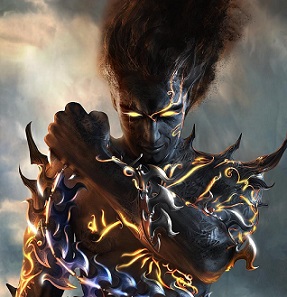 The Prince's dark side, born from the infection of the Sands of Time. From time to time, he'll take over the Prince, forcing the character to play as him. The Dark Prince is ruthless, powerful, and sand-bound, but depletes health quickly when he's in charge. He uses the Daggertail that was bound into the Prince's arm as a weapon. Near the end of the game, he reveals his intentions to take over the Prince's body, which leads to the Prince finding a way to banish him once and for all. 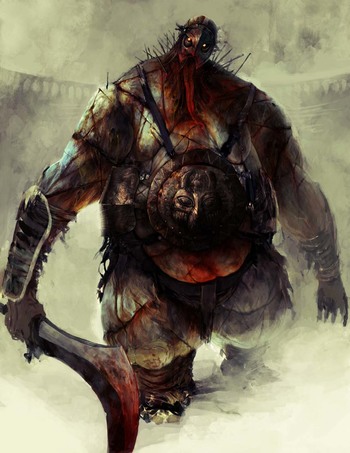 One of the Vizier's Scythian generals. The Sands turned him into a huge, hulking brute who dwells in the Arena.

One of the Vizier's Scythian generals, and the leader of the House of Cat. She is the woman who put the Daggertail in the Prince's arm. She holds some women hostage inside a brothel.

The Twins (Axe and Sword) 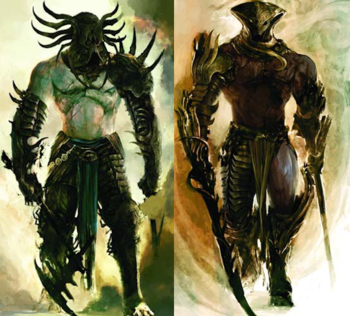 Two of the Vizier's Scythian generals who are bloodthirsty twin brothers with great fighting skills, called Axe Brother and Sword Brother. The Axe Brother leads the House of the Scarab and the Sword Brother leads the House of the Spider. The former traps the Prince in a burning workshop before being chased by him through the streets of Babylon. The Prince then faces both brothers in a ring of fire. 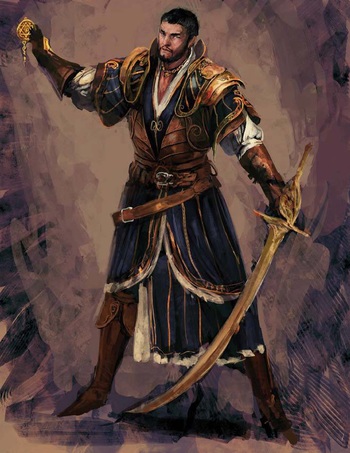 The Prince's elder brother and his mentor. He tried to use the Sand Army to stop an invading army... and ends up fighting the evil Ratash and the army. Ends up getting killed and possessed by Ratash. 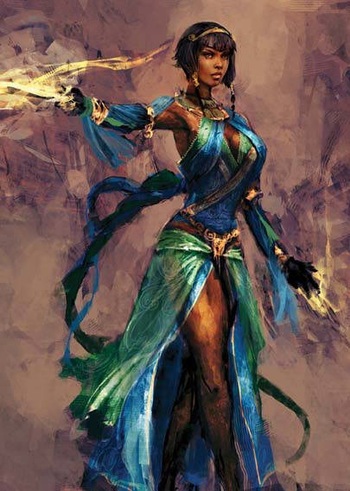 A beautiful Djinn's woman and Queen of the Marid, who helps the Prince against Ratash. In the end, she merges herself with the Djinn's Sword to give the Prince a weapon to use against the evil ifrit. 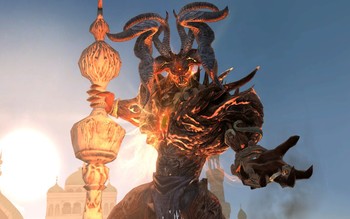 An evil ifrit who was imprisoned by King Solomon. Released along the Sand Army, he wants to take over the world.