Video Game / NSFW ~ Not a Simulator For Working 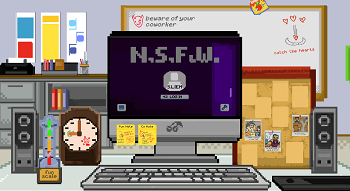 Just another day to start.
NSFW ~ Not a Simulator For Working is a Simulation Game where you try to avoid getting caught watching NSFW content while working. It is developed by GameChanger Studio.

You play as Stephan Liem, a new employee to a company called "Ndrey, Sudim, Flare and Wida" (N,S,F&W). But the moment you step into the job, you immediately hate it so much, you have to resort to wasting time just to cope.

For each day, you have to balance your time between working and "having fun". While working, your fun scale slowly decreases, but you'll be in the safe zone. Right-click to switch your screen to NSFW content so that your fun scale increases back-up, but right-click to switch back to working again before your co-worker(s) find out about what you do and file a complaint. If your fun scale is too low, you will be laid off for being too boring at work, so you can't just stay in the safe zone too long either.

You can buy it at the Steam Store here

NSFW ~ Not a Simulator For Working provides example of:

Videos that can be bought and used provide examples of: