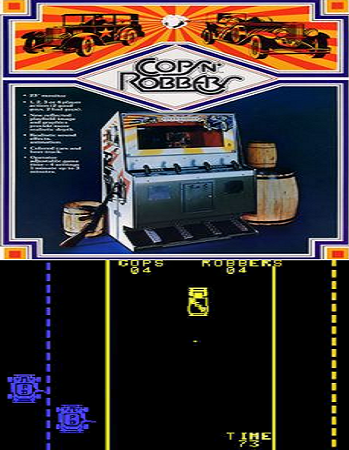 Cops N' Robbers is an Atari Arcade Game from 1976, for 1 to 4 players (plus a computer player if there are 1 or 3 players). It's a Top-Down View, Player Versus Player Shoot 'em Up, set in The Roaring '20s or the early '30s. One or two players control police cars driving up a road on the left side of the screen, and one or two players control the robbers' cars on the right side. Gas pedals let you move the cars up and down the screen, and a joystick lets you aim and fire a gun sticking out of the side of the car. Beer trucks drive up the middle of the screen, getting in the way.