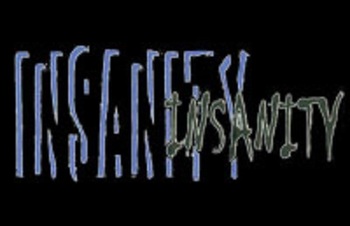 Insanity was a haunted house from Universal Studios' Halloween Horror Nights 1999, located in Soundstage 22 along with Psycho: Through the Mind of Norman Bates.

One room, referred to as "Isolation" in concept art, contained numerous bloody bags suspended from the ceiling, with a shape suggesting they contained hanged bodies. Among these were a tattooed scareactor wielding a jagged knife.

Another room was decorated with large, glow-in-the-dark tarot cards such as Death, The Hanged Man, and The Devil. There was also an opening where an evil harlequin scareactor was hiding.

According to one account, on the first night, guests were taken through what may have been this house in groups of 15 or 20, instead of the usual constant line. In the first room the doors were shut and the lights were turned off, leaving the guests in pitch blackness. A wolf or dog started to growl in the background, and a round, fuzzy thing was run along and around the guests' legs. After a short while, the doors opened again. Reportedly, this effect was never done again, as it held up the line for too long.

This house provides examples of: