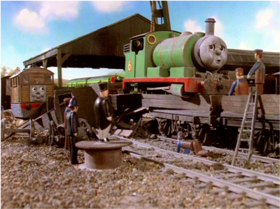 Daisy's time on the Island of Sodor is going badly for everyone concerned. Not only is she frightened of bulls and cows, she remains lazy, bad-tempered, stubborn and refuses to do jobs she doesn't want to do, to which she makes excuses.

Percy grumpily shunts trucks one day, as Toby pulls in noticing Daisy has once again refused to take the milk wagon, forcing Percy to make a special trip with it after his normal work is done. Wanting to help, Toby offers to take the milk if Percy fetches his trucks from the quarry in return. The crews agree to this and Percy sets off.

Percy goes to the quarry to fetch the trucks. Having never been there before, he starts enjoying himself by ordering the trucks about. The trucks don't take kindly to a stranger entering the quarry and giving orders and vow to pay Percy out. Once arranged into a goods train, the trucks lure Percy into a false sense of security by following him so quietly that he thinks they are under control. When Percy sees a sign saying "All Trains stop to pin down Brakes", he whistles to the guard to pin down his brakes, only for the trucks to push him along. Due to warning the traffic at the crossing, The signalman is too late to switch Percy to the runaway siding and Percy crashes into a brakevan, destroying it and perching himself on top of the remains of a truck.

The next day, Toby and Daisy help clear up the mess. The Fat Controller arrives and scolds Percy, telling him that because of his bossiness toward the trucks, now the branch line will have to be run with only Toby and Daisy, leaving it in an awkward predicament. Percy, very much stuck in his own predicament, understands what he means.

The Fat Controller also tells Daisy off for her laziness, but gives her a second chance given how hard she worked after Percy's accident. Daisy is pleased and promises to work hard with Toby's help. Knowing Toby has a lot of experience with running a branch line, the Fat Controller is satisfied.

The next day, Thomas returns from the works and is happily reunited with Annie and Clarabel while Percy is sent away to be repaired. All the engines are now friends and Daisy learns a lot from Toby, leading her to become a really useful engine, even managing to scare a cow away all on her own.