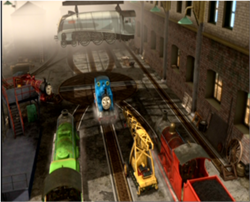 Sizzling Sodor! What has happened to my beautiful steamworks?!!"

While Victor is visiting the narrow gauge engines at the Transfer Yards, Thomas is put in charge of the Sodor Steamworks. Thomas feels very excited; so excited in fact that he does not listen to Victor's instructions to ask the engines about their problems and to ask Kevin for advice.

Not long after Victor leaves, Spencer arrives and is very surprised to see Thomas in charge. Spencer needs a repaint, but Thomas thinks that Spencer needs repairs, so he tells him to go onto the locomotive hoist. Then Henry arrives coughing and sneezing as his firebox needs cleaning out. However, Thomas thinks that some special coal will cure Henry, so Kevin collects some special coal whilst Spencer is still on the hoist. Then, James arrives with a blocked funnel, but Thomas thinks that James needs a new funnel, so he tells Kevin to collect one. But, Kevin gets so confused that he causes the load of coal he is carrying to create a mustache on Spencer's face, and worse still, Kevin accidentally turns on the hoist with Spencer still attached to it. Finally, Kevin bumps into James, who blows black soot out of his funnel, just as Victor arrives back.

Victor is shocked to see his Steamworks in a terrible mess, and Kevin thinks that, as he's clumsy, it was his fault. But, Thomas owns up that he was too excited about being in charge of the Steamworks that he did not listen to anyone. And with much-needed assistance from Victor, Thomas puts everything right. First, Thomas & Victor went to Spencer, that he says that he don't need to go on the hoist, but he need his livery repainted. Next, to Henry that he already had his special coal, but he need his firebox cleaned out. Finally, to James that he don't need a new funnel, but he want his funnel cleaned and polished, and they say thank you to Kevin, who called Thomas, boss instead.