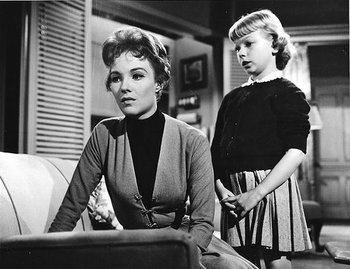 "I know all about you..."
Rod Serling: Month of November, hot chocolate, and a small cameo of a child's face, imperfect only in its solemnity. And these are the improbable ingredients to a human emotion, an emotion, say, like—fear. But in a moment this woman, Helen Foley, will realize fear. She will understand what are the properties of terror. A little girl will lead her by the hand and walk with her into a nightmare.
Advertisement:

Helen Foley (Janice Rule) is a schoolteacher with a troubled past. She comes home one afternoon to her apartment and meets a young girl, Markie, sitting on the stairs of her apartment building. Markie is an odd child with a deadly serious manner. More disturbingly for Helen, Markie is strangely knowledgeable about Helen and about Helen's past. Markie demands to know about Helen's past, and about a terrible trauma Helen suffered when she was a child.

Nightmare as a Trope: