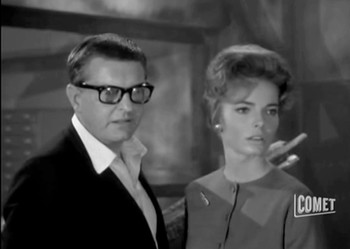 "If you can understand me, do you have a name?" 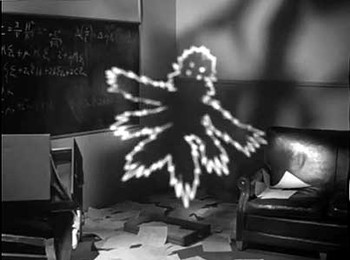 "I am called Eck."
The Control Voice: Since the first living thing gazed upward through the darkness, Man has seldom been content merely to be born, to endure, and to die. With a curious fervor he has struggled to unlock the mysteries of creation and of the world in which he lives. Sometimes he has won. Sometimes he has lost. And sometimes, in the tumbling torrents of space and time, he has brief glimpses of a world he never even dreams...

A two-dimensional being enters our world by mistake and needs the help of an optometrist to return home.

The Control Voice: Paradoxically, Man's endless search for knowledge has often plundered his courage and warped his vision, so that he has faced the unknown with terror rather than awe, and probed the darkness with a scream rather than a light. Yet there have always been men who have touched the texture of tomorrow with understanding and courage. Through these men, we may yet touch the stars.