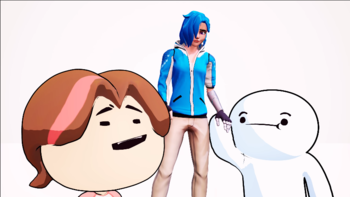 From that shocking season finale... to this.
An animation about action, drama and hamburgers.
Advertisement:

In this special short, Sofia sends Tari into the game Fast Food Fight in order to practice her problem solving and social interaction skills with NPCs, by trying to settle the sandwich-related differences between TheOdd1sOut and Arin. Hilarity Ensues.

The special contains examples of: