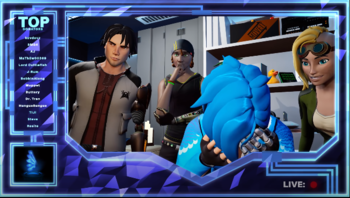 Don't worry, Tari. The embarrassing livestream is nothing compared what you'll have to go through in the actual series.
We made an animated short where Tari tries to stream a game for you but everything goes wrong.
Advertisement:

As the title implies, this short follows Tari as she attempts to do a livestream of Battle Blaze, which keeps getting interrupted by her friends.