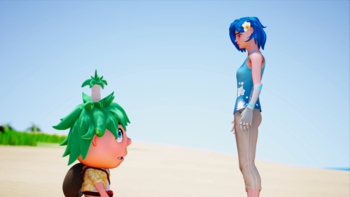 "Was my life always this crazy?"
Tari has warped into the video game; Ultra Jump Mania! With the guidance of Theo, what trials will Tari face in a game where terror looms around every corner?
Following up immediately from the end of the last episode, Tari, whilst trying out Ultra Jump Mania for the first time, suddenly finds herself on the starting level of Simpleflip Island, where she comes across the game's hero, Theo aka Coconut Boy. As she tries to traverse the level with Theo, she discovers she has the abilities to analyze info about the world she's in, discovering new ways to master the game. Meanwhile, in the real world, the TASCorp scientists investigate Tari's frozen body, with their boss, Lucks, realizing the potential for her mysterious ability to make his company even more powerful...