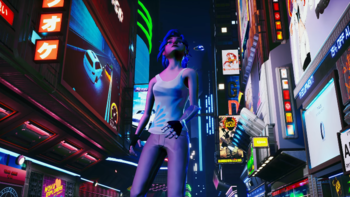 "Video games are everything."
Tari wakes up in Silica City and discovers what it's like to be in a world obsessed with video games...
Advertisement:

Welcome to the world of Meta Runner, where video games are a way of life, and Meta Runners, professional gamers with performance enhancing cyborg arms, are adored by the public. Here we meet our protagonist, an amnesic girl with a Meta Runner arm named Tari, as she wakes up in a lab and stumbles out into the streets of Silica City, the video game capital of the world. As Tari explores the city, hoping to find something to trigger her memories, little does she know that a visit to a store owned by the biggest corporation in the city will change everything...