Recap / Gunnerkrigg Court  Chapter 1 "The Shadow and the Robot" 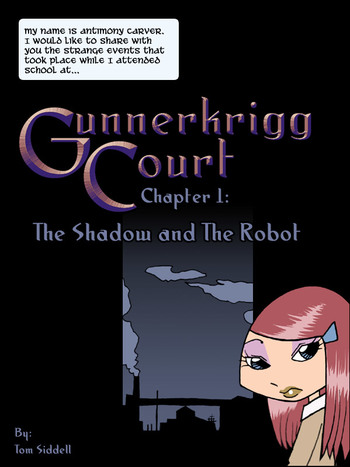 Welcome to the Court

Antimony Carver has just transferred to Gunnerkrigg Court, a strange school the size of a city, and which looks more like a large industrial complex. And she's mysteriously acquired a second shadow. She manages to communicate with it, and learns it comes from the forest on the other side of the river, separated from the Court by a deep gorge. The sole bridge to the forest is lined with lights so there aren't any shadows on it, so he can't go home. Annie can't cross herself because she'd get in trouble, so she finds a dismantled robot in a room with "NO Spare Robot Parts" and snaps him back together. She sends the robot, who she calls "Robot", across the bridge to take Shadow 2 home.