Quotes / TitansGrave: The Ashes of Valkana 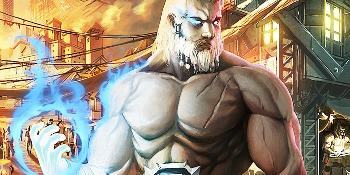 Valkana is a broken and wounded world, a post-apocalyptic land of science fantasy...
Aeons before Valkana heard her own name, she bore witness to beings not of this realm. These ancients planted the seeds of life on Valkana, and as that life grew and civilizations formed, the thirst for supremacy blossomed into war.

Gifted with an unmatched intellect, the Saurian Empire built built mighty war machines and claimed dominion on Valkana — until the heavens themselves fell upon them. Valkana was plunged into darkness and a thousand years of war. In this crucible, great heroes were forged, and together they extinguished the flames of battle. A new civilization was built on the ruins of the old, a peaceful world of magic and science.

But the forces of chaos are patient, and not easily contained. Left to fester, ancient evils threaten to emerge and unleash mayhem upon the world. And so, to face them, new heroes must arise from... The Ashes of Valkana!
—Opening Narration
Advertisement:
"Five gold and a party!"
—The whole party and various NPCs, rather often