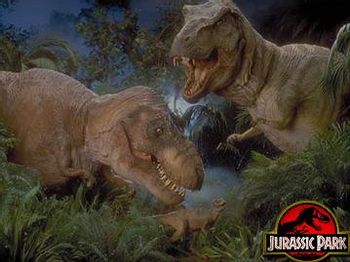 A T. rex family. It's probably not a good idea to bother the baby.note We speak from experience. Don't say we didn't warn you!
"Tyrannosaurus is the most superb carnivorous mechanism among the terrestrial Vertebrata, in which raptorial power and speed are combined."
— Henry Fairfield Osborn, the paleontologist who coined the new genus in 1905

As noted in Stock Dinosaurs, T. rex is by far the most common dinosaur that appears in fiction. While it may not have been the biggest carnivorous dinosaur ever, it was probably among the most powerful and dangerous. It is certainly the most famous, mainly because it looks badass, and is also the only dinosaur popularly known for the whole scientific name (genus Tyrannosaurus, species rex) instead of just the first term. It helps the name was described by Randall Munroe as

the most badass scientific name ever after Smilodon fatalis (Saber-toothed cat). The T. rex in general is often used as a Rule of Cool stereotype, and is a frequent target of the Ninja Pirate Zombie Robot trope. (Vampire T. rex, anyone?

In fiction, Tyrannosaurus, like all carnivorous dinosaurs, seems to really like the taste of humans, despite the fact that we're fricking tiny compared to it (imagine passing on a turkey dinner to run a mile for Chicken McNuggets). Expect to see Tyrannosaurus roaring constantly and shaking the earth with every step as well as always active and on the prowl, never stopping to rest in order to conserve its energy. Rule of Cool always wins, but in Real Life predators will tread softly and shut up while hunting; otherwise how would they ambush their prey with success?note  Paleontologists now seem to think that Tyrannosaurus and other large theropods may not have roared at all and probably made hissing, rumbling, and growling sounds like crocodiles. It might have also been on a frequency too low for human ears to register, and we wouldn't hear it, we'd feel it It is also usually implied to be male, perhaps because Tyrannosaurus rex means "Tyrant Lizard King". Some scientists have suggested the females were larger; though this is plausible, solid scientific evidence for this hypothesis is not as strong as it used to be. In addition, it's theorized that large, adult Tyrannosaurs would hunt less and basically Kill Steal the hunts of other carnivores and younger T. rexes; the highly advanced olfactory sense of the creature allowed it to sniff out carrion from miles away, and a roar would have definitely helped scare off smaller dinosaurs from a kill. Due to an adult's size and strength, however, it's also very possible that it simply fought animals like Triceratops and won, whereas younger, smaller Tyrannosaurus hunted hadrosaursnote Duck-billed dinosaurs who are theorized to have lived by rivers and ran when confronted the old fashioned way.

In earlier fiction especially, all carnivorous dinosaurs on the bigger-than-a-human side tend to be confused with T. rex, and Tyrannosaurus itself will sometimes be depicted with non-tyrannosaur features, such as three fingered hands (tyrannosaurs only have two). Sometimes the authors will dismiss T. rex as "cliché" and use another large theropod as their Designated Villain. The attempt to be anti-cliché will usually be self-defeating, as the other theropod will tend to be used in such an inaccurate, Pseudo-Rex fashion that they might as well have just used the obligatory T. rex anyway. This tends to happen to poor Allosaurus most often, despite that fact that they really don't look that much like T. rex, aren't that closely related, and aren't nearly as large. Fortunately, as new fossil evidence helps us straighten out how the various Theropods are related, this is becoming a lost subtrope. (See that other Wiki

for more information about this.)

In older fiction, tyrannosaurs and many other bipedal dinosaurs were typically portrayed in an upright "tripod stance" like a kangaroo (pretty much the only bipedal animal with a long tail early paleoartists could use as a model; see Godzilla). Science Marches On, however, and by the '70s, it was generally agreed by the paleontological community that dinosaurs did not drag their tails. However, it wasn't until Jurassic Park came along in 1993 that this view managed to filter into pop culture: just the scene of a group of humans in a jeep being chased by a Tyrannosaurus with that proper anatomic structure, and looking like she had a real chance of catching them, was enough to lock it in the public imagination. Even then, newer works still sneak in the tripod stance every so often, usually by showing T. rex in a "triumphant" pose that resembles the stance.

Its puny arms are a staple of ridicule. Very often they are thought of as useless, scrawny, and weak. Part of this is practicality; large arms would have gotten in the way of the Tyrannosaurus's bite, which is theorized to have been the most powerful bite of all dinosaurs, hence the need to have small arms where other predators would have clawing weapons. Additionally, in spite of their size the arm bones show signs of large muscle attachment and thus, they were very strong and capable of lifting 200 pounds (90 kilograms). Because of this, T. rex might have used them to hold onto struggling prey while it dispatched it with its jaws. In addition, they could have also been used to help lift the T. rex from a sleeping position when it was waking up. Also, as with all theropods, its hands are almost always depicted as pronated, when this is now considered impossible in real life. They are supposed to face each other, like a person about to clap.

If a work of fiction involves Time Travel, the probability of a Tyrannosaurus appearing is directly proportional to the number of episodes. If the characters time-travel once in a series, they will either end up in a hilariously inaccurate version of the late Cretaceous and meet a T. rex or a hilariously inaccurate version of the Stone Age — where they may meet a T. rex anyway. Likewise, a machine that merely pulls things out of the past, or other dimensions, seemingly has a 90% chance of grabbing a T. rex. If the work of fiction supposedly doesn't involve Time Travel, there's a good chance of the T. rex nevertheless encountering critters from wildly different eras, such as Stegosaurus, which predates Tyrannosaurus by a good 10 million years longer than T. rex predates us.

Also, there was far more than one kind of "tyrannosaur". The word "tyrannosaur" can be used to describe various relatives of T. rex belonging to the superfamily Tyrannosauroids

. It turns out this group included members both large and powerful like the almost-identical Asian Tarbosaurus and the smaller North American Albertosaurus, Daspletosaurus and Gorgosaurus. Earlier members were small and quick, such as Eotyrannus and Guanlong.

There is also ongoing research about the theory that it (along with other tyrannosaurids) might have had feathers similar to the dromeaosaurids, ornithomimids, therizinosaurids, oviraptorids and (of course) modern-day birds due to being in the same clade as them (Coelurosauria

), as well as having a relative in China named Yutyrannus, which is proven to have sported plumage. Even if it did have feathers, most paleontologists speculate that it likely wouldn't have adhered to the Goofy Feathered Dinosaur image and would've only had a thin coat of feathers at most in adulthood given its sheer size. While nothing has been set in stone (with being either feathered or "naked" both equally plausible, though some think it was only partially covered), the debate continues to this day, since on the other hand impressions of scales on parts of the body have been found on other types of tyrannosaurids and even T. rex itself.

Another important note: T. rex lived only in what is now central North America (ranging from about Alberta to Texas), so don't expect your time traveler to bump into them if they take off from anywhere else in the world (unless it's one of those time machines that can go to a different location). This is partly due to Science Marches On - specifically, the Asian Tarbosaurus was long suggested to be a species of Tyrannosaurus, and in fact that's still debated among paleontologists.note The one known species, Tarbosaurus bataar (Alarming Lizard Hero) is so similar to T. rex that the name Tyrannosaurus bataar might be more appropriate (though "Tyrant Lizard Hero" would be something of an oxymoron). However some scientists have concluded based on skull analysis that Tarbosaurus did not have binocular vision (that is, the ability to focus both eyes in the same direction, allowing for depth perception) while Tyrannosaurus did, which would be a rather significant difference despite the two species being otherwise very similar. Given the lack of surviving genetic samples from 65 million years ago to compare, it's probably impossible to know for sure.

In addition, Tyrannosaurus rex should never be confused for another