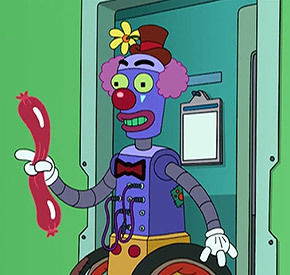 This robo bozo is kind of a dodo.
"Hey implings! It's me, the robotic Fizzarolli! Shipped from King Ozzie's factory to bring you a wonderful show celebrating Loo Loo Land, spelled with O's to avoid lawsuits! Hit it!"
— Robo-Fizz, Helluva Boss
Advertisement:

Clowns and robots. While they may seem vastly different at first glance, a little look at their histories reveals that they're more similar than they seem - both started out loved by many, but as the years went by, evil portrayals of the two became more popular. Because of their similarities, many creators find it fitting to combine the two, creating a Robot Clown.

While clowns and robots as we know them were not introduced until much later, early concepts for the two date back as far as Ancient Greece, making them Older Than Feudalism. Back then, there were "rustic fool" performers - predecessors to clowns - and stories about artificial life, such as the bronze man Talos. Both clowns and robots, however, really started to become popular in the 1800's, when performer Joseph Grimaldi served as the Trope Codifier for most things we associate with clowns nowadays, such as wearing facepaint and frilly clothing. Also at that time, remote-controlled machines were becoming more common.

Then, in 1921, the idea of sentient, human-like robots became well-loved thanks to the release of Rossum's Universal Robots, and continued to increase in popularity thanks to the works of sci-fi writers such as Isaac Asimov. These works fueled a fear of robots dominating humans, leading to the prominence of tropes like A.I. Is a Crapshoot and Killer Robot. However, clowns were still well-received... until the late 1900's, when Monster Clowns became more popular, and the traditional Non-Ironic Clown all but faded away in the eyes of the public. But it's somewhat understandable, considering that both robots and clowns have a bad tendency to fall into the Uncanny Valley.

For this reason, it seems logical that if you style a Killer Robot after a clown, that makes it even scarier. Even in works where most, if not all, the characters are robots, having one be a clown (or vice versa) can really help him or her stand out. And so Robot Clowns have surged in popularity, just like evil human clowns. However, not all Robot Clowns are bad. Some works use these characters the way they were meant to be portrayed - as fun, helpful characters, devoid of malice. Whether a Robot Clown is good or bad, as long as it clearly exhibits traits of both a robot and a clown, it belongs here.

Even the qualities that clowns and robots don't share lend a hand in the effectiveness of these characters. Clowns are usually flamboyant and energetic, while robots are static and emotionless. The contrast between the two can make for an interesting character when they are combined. It's also worth noting that, like their human counterparts, Robot Clowns are mainly used In-Universe as entertainers, unlike "normal" robots, who are mainly used as servants.

Sister Trope to Robot Athlete and Robot Maid as well as a Subtrope of Ninja Pirate Zombie Robot. May overlap with Funny Robot if the clown in question is made intentionally funny. See also Hostile Animatronics, if the character is evil. For more clowns with extraordinary abilities, see Magical Clown.