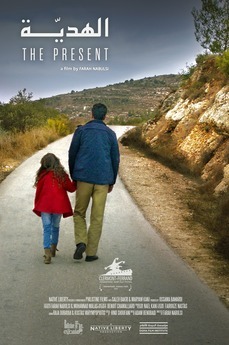 The Present is a 2020 short film (24 minutes) from Palestine, directed by Farah Nabulsi.

Yusuf is a husband and father. It's his anniversary, and he is going out to get his wife Noor a present, and he's bringing his daughter Yasmine along for some ancillary shopping.

That sounds like an easy plan, but because Yusuf lives in the occupied West Bank of Palestine, it isn't. Yusuf lives in the West Bank, so, to go shopping he and Yasmine have to squeeze their way through an overcrowded pedestrian bridge before reaching a checkpoint, where Yusuf has to go through a humiliating detention and search at the hands of the Israeli Defense Force. Father and daughter finally make it through, do their grocery shopping, and get Noor's present—a new refrigerator. But they still have to go back, which means they have to suffer through an even more degrading checkpoint encounter with the IDF.