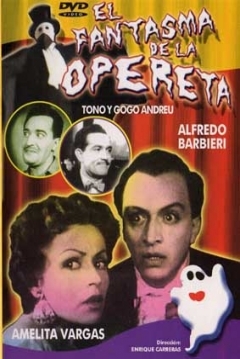 Who you gonna call?
El Fantasma de la Opereta (The Phantom of the Operetta) is a 1959 Mexican film starring actor/comedian German Valdez "Tin Tan". It is a parody of The Phantom of the Opera. Taking place in (then modern) Mexico, Valdez plays a huckster who decides to produce a musical show in a supposedly haunted theater. He also tries to romance the show's main star. Suddenly he begins receiving death threats allegedly from the ghost, but he refuses to believe in them. Progressively stranger things begin happening.

Phantom of the Operetta offers examples of: