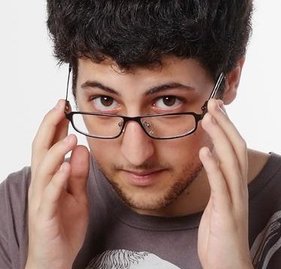 Born June 13, 1991, Yotam Perel is an Israeli Adobe Flash animator known for his incredibly dark, surreal humor. He began experimenting with Flash in 2003, when he was just 12, his first submission ever being on Newgrounds, which was a simple animated music video for "The Beer Song".

He would remain relatively unknown outside Newgrounds and deviantART until 2007, when the sixth volume of his Nameless series, an animation series which had already been in the works for quite a while since then, was picked up by Albino Black Sheep, along with it Bob and the Apple and a few other choice shorts. Yotam grew in popularity, and by the time Nameless was put on hiatus, he had become fairly recognized as a Flash animator.

Come 2010, Yotam's animation skills had evolved quite a bit from his humble animating-mouths-onto-already-existing-pictures beginnings, and new series began showing up, such as Yotam & Fantasia and Lazy Writing, as well as the News Show on his YouTube page. His Newgrounds page had reached 2 million views, and his subscribers on youtube was also probably significantly higher than they were before too.

In 2012 he was the number one most subscribed comedian on YouTube (in Israel), had over 4 million views on Newgrounds and Albino Black Sheep, had lost a bunch of weight and has had other popular YouTubers (such as Egoraptor and Max Gilardi) appear in his videos.