Zendervai Visiting from the Hoag Galaxy from St. Catharines Relationship Status: Wishing you were here

Yeah, they were never going to get the full rights. The theme park rights were a separate thing from the movie rights since Warner Bros barely gives a shit about theme parks. Chapek fucked it up after the movies started being made and it was just for theme park rights.

Disney was never going to have an angle to get all the rights to Harry Potter (just like how Universal has no avenue either, they just have theme park rights, just like how Universal has the Marvel theme park rights east of the Mississippi and they'll never let those go if they can help it, but they have no influence over anything beyond Hulk solo movies) which is probably why Chapek fucking up wasn't a firing offense at the time. They lost some theme park opportunities but nothing else.

Remember: Disney had a whole joint park with MGM for ages and they've still got a ride there that's themed after a CBS property (Twilight Zone Tower of Terror), even after jettisoning the MGM stuff. Sometimes they really do just want theme park rights and don't give a crap about getting the rest of a property, even if that tendency has gone way down, lately.

Not Three Laws compliant.
dRoy Ready to Rant from The Happy Place Relationship Status: A cockroach, nothing can kill it.

So basically Elemental is...

...What if the elements have feelings?

Mother of god...You turned one of the hardest and best Champions into an absolute joke. - Zelenal
OmegaRadiance

Cause usually the boy is fire and the girl water. Much like Female Angel, Male Demon

SAwatching from south africa Relationship Status: Above such petty unnecessities

There has been a rumor going around or more of a prediction by a former insider, is that Bob Iger is interested in selling Disney to Apple. 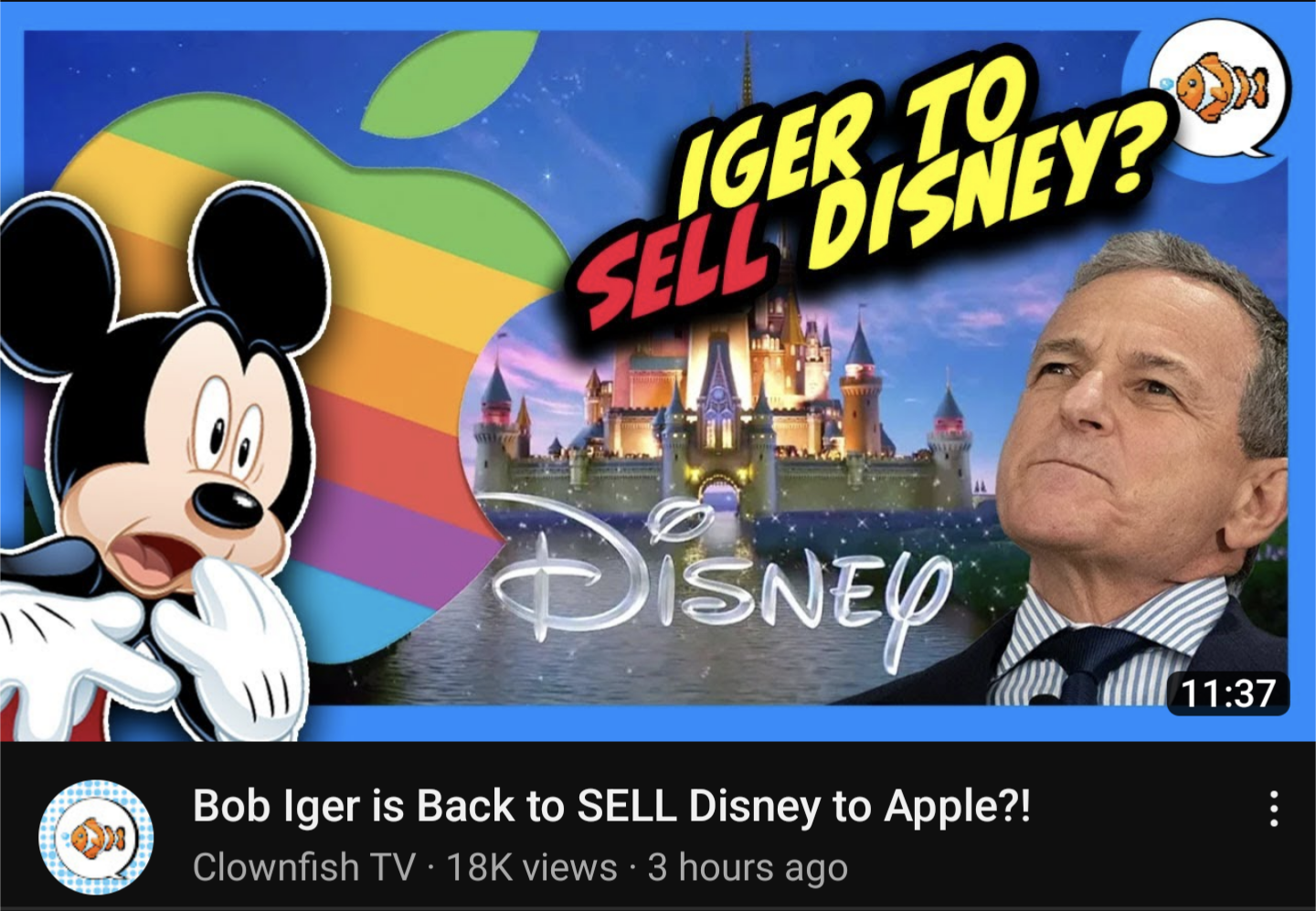 If your good mood was ruined because you got into an accident with a car...
LoneCourier0 Idea Seeker from Center, North, South, West, East Relationship Status: Barbecuing

Ah yes, Clownfish. "My source is that I made it the fuck up."

You may be satisfied, but I wasn't.
SAwatching from south africa Relationship Status: Above such petty unnecessities

Oh, I heard about it on another site but if Clownfish is supporting it them it must be fake or exaggerated. Nothing but tabloid.

Apple might want to snap up someone's library, but I don't think they'd want to touch Disney, because Disney's too big to mold into the Apple corporate style. If Apple was interested in Lionsgate, I might buy that.

Apple gets a lot of these predictions, mostly because their approach to the content streaming wars has been pretty different from everyone else's and a lot of people are having issues parsing that.

For context: Apple TV+ has been building up their library almost completely through original content. They have very little legacy media they've licensed and what little there is is mostly very heavily region restricted. That comes off as really strange in the context of...well, everyone else, but it's likely just the Apple mindset of operating a different wholly controlled ecosystem popping up.

Thank you for ClownfishTV posting. I needed a good laugh this morning.

they were actually a clown for once!

It takes more than a costume and an attitude to do this work. — RIP Kevin Conroy
megaeliz

Since leaving the company altogether last year, Mr. Iger has been known to dominate lunch conversations around Los Angeles with talk of how he thinks Mr. Chapek has taken Disney in the wrong direction, according to several people who have dined with him in the past several months. Some associates said Mr. Iger would fixate on the topic so much that it became uncomfortable.

Mr. Iger felt Mr. Chapek, who set ambitious goals for the growth of Disneys streaming business, had given priority to that business at the expense of other parts of Disney, like cable television and the theme parks. Mr. Chapek said in 2020 the number of subscribers was growing fast, and he dramatically boosted initial growth projections. Mr. Iger thought Mr. Chapeks projections went too far, according to people familiar with Mr. Igers thinking.

Mr. Iger also felt that Mr. Chapek was too responsive to changes in Disneys share price, and Mr. Iger was alarmed by increases in prices at Disney theme parks that Mr. Chapek argued would boost revenue and limit overcrowding, these people said. Mr. Iger received calls from creative executives frustrated with Mr. Chapek, people familiar with the matter said.

Hes killing the soul of the company, Mr. Iger told more than one confidant.

> Hes killing the soul of the company,

..Disney hasn't had a soul in years,it's a billion dollar mega corporation,what he means to say is that Bob Chapek is'nt making the company profitable enough for investors

At least he seems to actually like Disney, which is more than can be said for Chapek.

Honestly, I get the sense that he really does understand the assignment here.

I love Disney's work and always will, but they really do need to be fed some humble pie. I like to think it's because I love them that I think this. There is absolutely such thing as too much of a good thing, especially when big bucks are involved.

The pig of Hufflepuff pulsed like a large bullfrog. Dumbledore smiled at it, and placed his hand on its head: "You are Hagrid now."
megaeliz

What? I'm not really following your train of thought here?

Was giving my thoughts on the company's soul or lack thereof.

The pig of Hufflepuff pulsed like a large bullfrog. Dumbledore smiled at it, and placed his hand on its head: "You are Hagrid now."
Ultimatum Disasturbator from Second Star to the left Relationship Status: Wishfully thinking

Ideally I wanted to mesh Casey's theme and it's reprise at night together since no one else did it especially well, and I figured I might as well join the videos together too...

Probably one of my favourite two scenes,makes me wish they could have a made proper animated movie based off Casey,they did however make cartoon titled 'The Brave Engineer' in 1950 which would have played in theatres

Right, it's the Disney adaptation of the Casey Jones story. That's the engineer folk hero, not the guy in the hockey mask from Teenage Mutant Ninja Turtles.

Speaking of folk heroes, would you allow me to get a potentially controversial opinion off my chest? I'd like to preface this with the full disclosure that I'm a straight white guy from the US, so if I inadvertently say something ignorant, please feel free to correct me and believe it was not intentional. That said...

...I have mixed-to-negative feelings on Disney's efforts to completely bury Song of the South.

Now, I totally understand the opposition the the Uncle Remus character. He's not authentic to the legends, instead being a condescending-at-best Framing Device created by the white compiler. But the animated shorts, Bre'er Rabbit and all that? Are drawn from actual African-American folktales, stories just as significant as Casey Jones and Hercules and Cinderella.

When you think about it, doesn't trying to erase these kind of have the opposite effect? Blotting out a genuine piece of Black culture and history? I know I first got into mythology with Disney's Herc, and have loved it ever since. Certainly at least the animated segments could be rereleased, maybe with a Censored Eleven-style disclaimer? And James Baskett was a pretty damn pioneering actor too from what I understand, on top of that.

Like I said, not trying to speak for anyone but myself here, and apologies ahead of time if I said something out of turn. But it's how I really feel.

The pig of Hufflepuff pulsed like a large bullfrog. Dumbledore smiled at it, and placed his hand on its head: "You are Hagrid now."
Aldo930 Professional Moldy Fig/Curmudgeon from Quahog, R.I.

As narrated by the March Hare, of course.

I admit I kind of feel the same. Song Of The South should have gotten a release as part of the Disney Treasures line where no kid was ever going to see it, and only adult collectors would ever get to own it... but unfortunately, it was simply too controversial.

I understand why it's buried and I wouldn't put it on Disney Plus or anything but, well, completeness and all. And I do think the Brer Rabbit tales have been unfairly tarred by the whole thing. Somewhere I have a copy of Julius Lester's retellings of the stories... which I probably bought at Splash Mountain, come to think of it.

(If Disney was still letting the damn thing be seen in foreign countries you could have a DVD to import of it but, unfortunately, they learned that the Japanese VHS was a big seller in Atlanta...)

"They say I'm old fashioned, and live in the past, but sometimes I think progress progresses too fast."
Robbery

Yeah, there's nothing wrong with any of the Br'er Rabbit stories (which haven't been buried by any stretch of the imagination—you can find collections meant for children, adults, and scholarly audiences), it's only Disney's 1946 approach which is objectionable. I think it'd be interesting if they got an African-American director and screen-writer to come up with a new approach to the Br'er Rabbit material.

Oh, they're still out there? Whew! I actually didn't know that; I only ever hear them mentioned in connection with "that creepy Disney movie that said slavery wasn't so bad" these days so I thought the movie had retroactively tainted the legends themselves.

The pig of Hufflepuff pulsed like a large bullfrog. Dumbledore smiled at it, and placed his hand on its head: "You are Hagrid now."
Ultimatum Disasturbator from Second Star to the left Relationship Status: Wishfully thinking

Disney's desire to bury Song of The South does leave other people to make adaptions of their own,which has actually already been done I think.