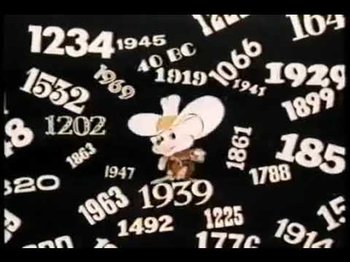 Wait, 40 B.C. and 1969 are more than 2000 years apart!
MAX the 2000-Year-Old Mouse was a series of animated shorts from Krantz Films (also see Rocket Robin Hood and the first Spider-Man).

Each episode – 104 in total, at roughly five minutes each – began with a depiction of a museum of historical artifacts, supposedly collected over a stretch of two millennia (hence the subtitle). The narrator (Bernard Cowan) announced a specific display, upon which a series of still art and lithographs were used to indicate the events that involved the display in question.

Along the way, a sentient white rodent (voiced by Paul Soles), who made his home in a little hole on the museum grounds, would provide commentary and at-best dubious claims to being at the actual event. Max’s comedic asides stood in sharp contrast to the serious narration of the timeline.