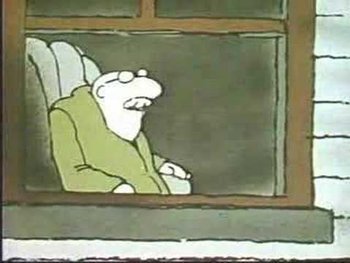 It's So Nice to Have a Wolf Around the House is a 1979 animated short film (11 minutes) directed by Paul Fierlinger.

An old man lives in a house on the docks with his old dog Peppy, his old cat Ginger, and his old fish, Lightning. The old man and his old pets decide they need someone to look after them, so they put out an advertisement looking for a companion. The ad is answered by a large, furry animal who glories in the name of Cuthbert Q. Divine. Cuthbert establishes himself in the house quickly, doing all the cooking and cleaning and ingratiating himself with his new friends. He insists that he is a German shepherd, unwilling to tell them what he really is—a wolf.