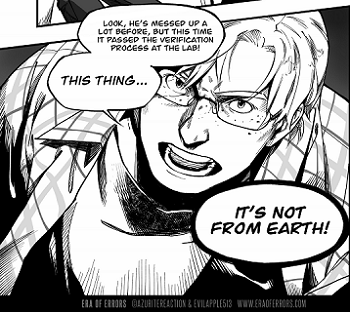 The first Wham Line in the comic.

. The webcomic's story is currently in the prologue, with the actual central storyline of the comic not revealed yet. Currently, Alex, one of the protagonists of the story, has come into contact with a genuine alien artifact, found by Quinn's dad, Garvey. Said contact has caused Alex to suffer some severe personality changes...

The story itself has been in production for well over 8 years now, with Azurite constantly re-writing and refining the story.

AzuriteReaction is primarily known for doing comedic, very non-serious gaming commentary videos with the occasional serious vlog/opinion piece, so this comic is a large departure from his previous content in general due to the serious, dramatic tone of the series.

The comic takes place on modern day (2014) Earth in California, and generally has a realistic tone to it. One of the goals of the author is to use real-world, cutting edge science as much as possible within the plotline, with the occasional exaggeration here or there for aesthetic/storytelling purposes.

It has also been stated many times by the author that storytelling elements using Chekhov's Gun will be extremely prevalent in this story; things that seem inconsequential at one point may (and often will) turn out to be much more important later on, and things that seem illogical or improbable at one point will often have a logical explanation at some point within the story.

Era Of Errors contains examples of: