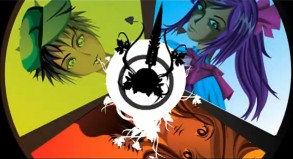 Ge.ne.sis is a Turn-Based Strategy game with RPG Elements available to play via Adobe Flash. Ge.ne.sis can be found here

A teenage girl named Neraine wakes up to a strange world that's like a dream. The statue next to her comes to life and she's greeted by the woman who introduces herself as the High Priestess. However, while she's talking to the High Priestess, Neraine gets attacked by a stange wolf like creature. The High Priestess gives her weapons and aids her in the fight. The fight ensues and afterwards, the High Priestess vows to stay by her side as Neraine sets off on her mysterious journey.

The next game, Wings of Ge.ne.sis, is a Spin-Off/Genre Shift to a Horizontal Scrolling Shooter. You can play it here

A third game, named Into the Rabbit Hole, is in development. Details about the game can be found here