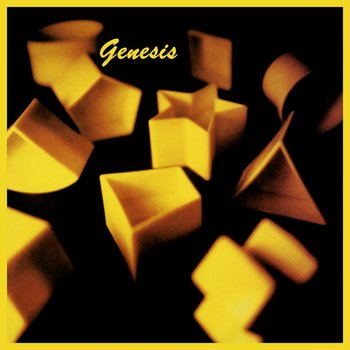 "I can't see you Mama, but I can hardly wait!"
"Just as I thought it was going alright,
I found out I'm wrong, when I thought I was right.
It's always the same, it's just a shame, that's all!
I could say day, and you'd say night.
Tell me it's black when I know that it's white.
Always the same, it's just a shame, and that's all!"
—"That's All"
Advertisement:

Genesis is the twelfth studio album recorded by the progressive and pop rock group Genesis. It was released by Virgin Records via the Charisma labelnote earlier in the year, Virgin bought the Charisma Records label; Charisma itself folded after Invisible Touch in the United Kingdom, and through Atlantic Records in the United States, on 3 October 1983.

After a successful tour of Abacab and a one-off gig in Milton Keynes with former bandmates Peter Gabriel and Steve Hackettnote largely to raise funds for Gabriel's then-flagging World of Music, Arts and Dance festival, Genesis took an eight-month hiatus as their members sought their respective solo projects. They reconvened in The Farm - their Surrey studio - to begin work on the album on March 1983, making this the first album to be written, recorded and mixed entirely there.

Welcome to the Trope by the Sea: