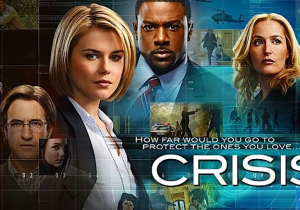 How far would you go?
"Who's in control?"

Crisis is a dramatic series which aired on NBC as part of the 2013-14 TV season in the United States, starring Rachael Taylor and Gillian Anderson. The show is created by Rand Ravich.

The children of some of America's wealthiest, most powerful families are taken hostage by armed terrorists, and none of the government agencies seem to be able to catch up. FBI Agent Susie Dunn gets involved as the agent in charge of the hostage rescue operation. During the operation she finds out that her niece is among the children who have been kidnapped. What should be a simple open-and-shut case of the federal offense of kidnapping turns out to have far deeper undercurrents than anyone suspects.

NBC has announced that Crisis will not be renewed after the season ends.

This is not to be confused with the Japanese TV show broadcasted in 2017 or the Smallville Fanfiction story of the same name.

Note: This tropes page, due to the format of the TV series, will spoil plot twists that are revealed in the pilot, so exercise caution if you have not seen the show.