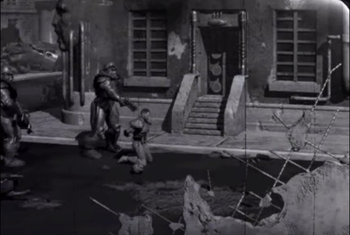 "Our dedicated boys keep the peace in newly annexed Canada."

is a Play By Post roleplay on the Unofficial Elder Scrolls Pages forum. Posted and maintained by dungeon master Knight Captain Kerr, Great White North is something of a spiritual successor to Kerr's Fallout: Vault 54, which was played three years prior and took place in post-apocalyptic Louisiana.

The roleplay takes place in the year 2099, 2 years after the events of Vault 54, in the province of British Columbia, Canada. The players took on the roles of the survivors of an attacked caravan, a motley group consisting of people such as a Canadian freedom-fighter, a kindly ex-Vault physician, an ill-tempered ghoul, and even a ten-year-old girl.

As is the standard for roleplays ran by K.C. Kerr, Great White North runs on a modified SPECIAL system called CASPIE, which is roughly the same while forgoing the Luck stat entirely. Outcomes of player actions are decided by the roll of a die against the stats and skills of the player characters.