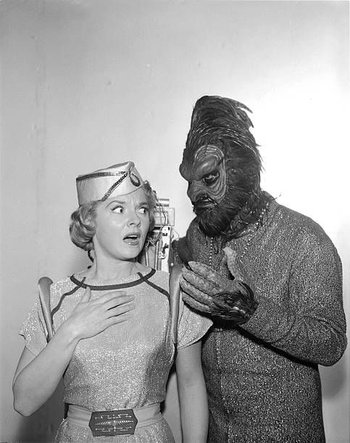 The Empyrian requests more peanuts from space stewardess Mara.
The Control Voice: When fear is too terrible, when reality is too agonizing, we seek escape in manufactured danger, in the thrills and pleasures of pretending—in the amusement parks of our unamusing world. Here, in frantic pretending, Man finds escape and temporary peace, and goes home tired enough to sleep a short, deep sleep. But what happens here when night comes? When pretending ends, and reality begins?

An alien turns an amusement park ride into a spaceship, and abducts some amusement park customers in the hope that they'll avert the course of an asteroid that threatens to endanger his planet and Earth.

This episode has no closing Control Voice narration.