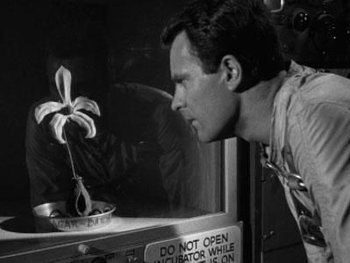 Lt. Howard beholds the fatal flower.
The Control Voice: For centuries, Man has looked to the skies and sought to uncover the mystery of the universe. The telescope brought into focus the craters on the Moon and the canals on Mars, but it was limited, and Man's insistent hunger for knowledge and experience would not be satisfied until he broke the massive chains of gravity and set foot himself on a planet other than his own. Project Mercury was his first venture into space — a testament to his technical ingenuity and courage, a green light to a hundred other projects which would take him still further. This is Project Adonis, a laboratory orbiting a thousand miles above the Earth, a tiny, far-flung world connected only by radio and memory, and inhabited by a handful of men dedicated to removing the unknown for future space travelers. At ten minutes after six on January 8th, Lieutenant Rupert Howard stumbled upon something clinging to the wall of the space-lock that appeared alive. He called them "space barnacles" for temporary identification. They were not...

An alien plant that emits poisonous gas is brought to Earth from a space station and reproduces rapidly.

The Control Voice: There are many things up there, evil and hungry, awesome and splendid. And gentle things, too. Merciful things...like rain.