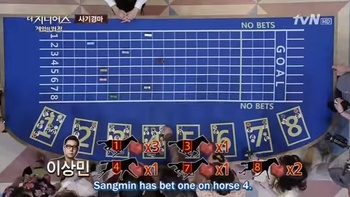 Today's main match is horse races. Players are given 20 chips and can bet on toy horses on a table. Race distance is divided into 20 squares and horses can move up to 3 squares ahead in each of the 12 rounds. If horse finishes 1st or 2nd, payout on these horses are calculated according to betting odds. Toy horses' moves are predetermined so all placings are fixed in advance.

Each player gets unique hint about the outcome of the race on a piece of paper (that they can't take away with them, so they have to memorize it). If players manage to collect enough hints from others they should figure out which of the eight horses come 1st and 2nd and make their bets accordingly. They can also buy additional hints for garnets.

Because of the betting odds players are encouraged to obscure their findings and only bet on the winning horse at the last possible moment to prevent other players following them and diminishing the prize with too many bets. Once race ends, player who won the most chips through betting wins the game.

Sunggyu and Sangmin go from people to people making deals and exchanging hints, while Gura feels isolated because this game is more catered toward individual deals and winning in a team is just not viable this time. Sangmin collects hints from Gura and Kyungran, and Sunggyu collects hints from several other people and buys one hint. When two exchange their info, answer seems obvious: first three horses are 7, 4 and 1. Sangmin is sure about 4 and 7 and convinces Yuram to bet on them.

As rounds and bets go by players give out more of their clues and disrepancy comes up. Info seems self-contradictory, unless they disregard one hint from "certain nuna". It was Eunji who fed Sunggyu wrong hint who relayed it to Sangmin which lead him to believe in wrong horses.

Kyungran just happens to have most chips on one of the actual winning horses, so she wins the game and gives immunity to Sangmin who gave her the most hints this round.

Yuram who was led astray by Sangmin's error loses and goes to Deathmatch. She picks Jungmoon as player with the most garnets for opponent. Deathmatch is a familiar Winning Streak game. Most players don't feel one way or another about neither women so they all promise to lose for both of them in Rock–Paper–Scissors. Except Poong who sees it as opportunity to earn some garnets and creates small bidding war between them to raise his bribe.

Deathmatch starts and to everyone's shock eliminated players come back to participate in Winning Streak. Because some of them were eliminated by players on today's Deathmatch (namely Minseo by Yuram and Changeyop by Jungmoon, just last episode) they promise to enact revenge and ruin their winning streaks.

Yuram has it relatively good, only cut by Minseo in 9th turn. Jungmoon faces her victim Changeyop and pleads him not to eliminate her. Changeyop has either forgiven her or just wanted to prolong her suffering and he loses for her. Jungmoon is relieved only to face Sangmin who suddenly cuts her streak. Sangmin felt bad about Yuram going to Deathmatch because of his error, so he saves her by eliminating Jungmoon.