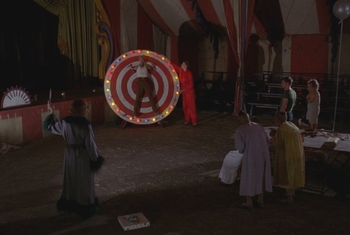 Elsa begins practicing throwing knives at a dummy strapped to a spinning wheel, an act she plans to use for her upcoming television show. Ethel expresses her concern that Elsa's leaving and Bette and Dot's sudden disappearance will affect the show's line-up and possibly ruin the freak show. Elsa is upset that some freaks do not believe her lie that the twins abandoned her while she took them dress-shopping, calling them ungrateful, but Ethel assures her of the freaks' loyalty by telling her of their plans for her upcoming birthday. Elsa promises that she intends to have her monsters join her in Hollywood.

At Mott Manor, Gloria presents Dandy with prophylactics (contraceptives), acknowledging his needs as a young man but urging him to prevent any unwanted unions between his inbred genes and the twins' faulty genes. Dandy refuses to violate the twins, expressing his love for the two and his intention to marry them. Gloria tries to make him see that the marriage is not a good idea, but subtly points out that she is being replaced by another woman and she needs to let him go.

Elsa is delighted with the party the freaks throw, but goes into a fury when she sees them a bit gloomy due to the twins' departure, and threatens to strap one of them onto her wheel if they do not have fun and forget about the twins. Later, she is in bed with Paul, whom she has been having a secret affair with for a while, and rebuffs Paul when she realizes that he is in love with her. As he dresses, she promises to let him see her when she goes to Hollywood and unknowingly insults him when she proposes to continue the affair even after she has a "normal suitor".

Paul has his second tryst in Penny's house, whom he kept correspondence with after her drug-induced stay in the freak show. He is truly in love with her and hesitates having sex with her until she can get to know him more. Their meeting is cut short when her father bangs on the door, and Penny opens it while Paul is hiding under the bed. Penny's father berates her for locking the door, having trust issues with her following her long absence and sudden return looking disheveled, and promises that he is just trying to protect her.

In the Mott Manor, Bette is falling for Dandy's affections but Dot isn't, wary that the Motts are keeping them captive, and wants to return to the freak show. However, when Dandy reads to them about the Brodie twins, Siamese twins separated into two, Dot realizes that she needs Dandy's money to fund the operation and fantasizes about being famous, normal, and in the arms of Jimmy, and decides to play along.

At the drugstore, Paul tries to buy Penny's perfume and is discriminated by the clerk. He sees Dandy purchasing pairs of feminine items and recalls Dandy, who shuns him and persuades the clerk to send him out. Paul stands up for himself, leaving and spitting outside the door. He returns to the big top, where Paul shares what he saw with Jimmy and confesses his suspicions of Elsa. Jimmy slaps him, reminding him that Elsa helps them all, but Paul tells him that Elsa is not the guardian angel she appears to be, and that Jimmy does not see this because he is accepted in society.

Back at the manor, Bette and Dot share their opinions in the death of one of the Brodie twins, with Dot asserting that her thoughts are her own. Dandy notes that Dot never shares her thoughts and always keeps her diary locked, and tries to persuade her to tell him a secret, as he thinks they shouldn't have secrets between them. He confides that he is the real hero for killing Twisty and Jimmy was passed out when Twisty was killed (not knowing that the real killer was really Edward Mordrake). He insists that Dot tell him a secret, but she refuses and he flies into a rage.

Stanley meets Maggie in the field and is distraught when he learns of the twins' disappearance. He suggests a plan for Maggie to seduce Jimmy into a shed, kill him, and cut his hands off, but she refuses and instead suggests Ma Petite, an easier catch and can fit in the formaldehyde jar, and Stanley agrees, impressed at her ruthlessness.

Elsa serenades Paul with "September Song", but notices his urgency to leave. She smells his perfume and demands to know who he is seeing, but he rebuffs her, spitefully saying everyone knows she is involved with the twins' disappearance. Outraged, she calls for all the carnies to be awakened and sent to the big top, where she rants to them and points out how she saved them from possibly miserable lives. She tosses the empty boxes from her party, calling all their efforts meaningless and shabby. She later calms down and says they can prove their trust if one of them volunteers for the wheel. Jimmy volunteers, but Paul interjects that it should be him. Elsa manages to throw two knives just short of maiming him, but hits his bowels at the last try. The carnies hurry to get him medical attention, but Elsa looks on without remorse.

Penny tries to sneak away from the house, but is stopped by her father with a shotgun. She stands up to him and leaves the house to "be with the man she loves". Maggie sneaks into Ma Petite's room and carries her off to the shed. She hesitates, but puts Ma Petite in the jar and looks at her with a bottle of formaldehyde. Penny arrives, looking for Paul. Paul is with Elsa, smoking opium for the pain as he realizes that Elsa did not call a doctor. Elsa promises she did, but she wouldn't shed a tear for him because of his betrayal, and notes that she would no longer be doing the knife act in her show. Penny bursts in, wanting to know how long since the ambulance was called. Elsa says they are in no rush.

As morning comes, Ethel ices the birthday cake for Elsa, much to Jimmy's chagrin, who realizes that Paul was right. Eve is frantic that Ma Petite is missing, but both Maggie and Ma Petite return, saying they've been chasing fireflies. Maggie tells Jimmy that they should soon run away together, kissing him. He says he will run away with her, but she should pack her bags while he takes care of something first. Maggie enters her tent to find an irate Stanley, who reverts to the original plan of killing Jimmy.

Gloria finds Dandy crying in his playroom while the twins are walking outside. Dandy has read Dot's diary entries calling Dandy boring and not amusing, and that she is only there because she wants the money for the operation. Gloria suggests he dote on Bette instead and inspire envy in Dot, but he goes into a rage, saying he doesn't want to buy love and she doesn't understand how he feels. He responds that the twins nourished his soul, but that nothing is left inside him but a wasteland. Now, he says that he will know no mercy and accept his "emptiness" as a blessing, not a curse. He says his new purpose is to bring death. Gloria follows him downstairs to the ringing doorbell. Jimmy arrives, and Dandy tells Gloria to let him in as he will be picking the twins up.

Ethel waits for Elsa with a slice of cake while the rest of the carnies are with Paul. Elsa muses that they are a kind of family, revealing her unhappy childhood and lack of a loving family. Elsa says she crafted her own family and says she loved them all, but that Ethel is the sister she deserved. Ethel advises her that no-one trusts Elsa anymore, after the series of calamities. Ethel swears that if she discovers that Elsa has lied about the twins, that she will kill Elsa herself. Elsa's birthday wish as she blows out the candle is to just be loved.