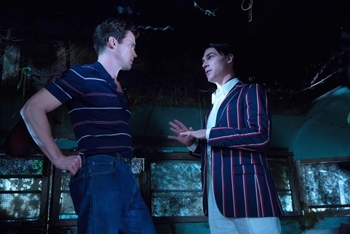 Stanley and Maggie hatch a plan to murder the freaks. Gloria hides the evidence of Dandy's gruesome new hobby. A health scare reveals Desiree might not be the oddity she once thought.

Stanley fantasizes a gala event for the American Morbidity Museum where he expects to be recognized for his contribution, but isn't. Maggie shoots down his fantasy, and they discuss his plan to obtain a specimen from Fräulein Elsa's Cabinet of Curiosities. Maggie wants an additional 5% cut for having to live with the freaks, and cautions Stanley to conceal his homosexuality.

At Mott Manor, Gloria discovers Dora's corpse and angrily calls Dandy, who suspects to have done it, saying Dora is a mother. Dandy offers to hide the body, but Gloria laments that she, like with all his other messes, must clean up after him and tells him to stay in his room the whole day. Dandy walks away crying, but, unknown to Gloria, shows no remorse.

Stanley introduces himself to Elsa as a WBN television agent, offering to give her a show of her own. Elsa turns down his offer when she finds out that it is a television show, saying television isn't going to last and is the death of civilization and art.

Maggie tries to warn Jimmy, practicing his lines and juggling for the upcoming packed house, about Stanley by reading his palm and telling him a man will come to bring him lies and false promises, and that he should leave for New York while he still can, but he brushes him off. He tries to kiss her, but she recoils, and he angrily leaves. Backstage, Ethel sends Jimmy to retrieve Dell, and at Dell's trailer, Desiree tells him that Dell has run off and she is not in the mood to perform. She tells Jimmy that he is wrong about Dell, and about the good times they had together. He sits beside her, and tells her that Meep was the brave one and is dead because of his cowardice and failure. He weeps and she comforts him, and they slowly end up having sex. Jimmy fingers her with his deformed fingers, causing her to bleed. With the townsfolk expecting Jimmy, Ethel rushes Desiree to Dr. Bonham.

Jimmy takes over emcee duties, introducing Elsa, who repeats her act of singing Life on Mars. Elsa is overwhelmed by the audience's boredom and dislike for her act, and is forced to cut her act and leave the stage when the audience throws popcorn at her. Elsa decides to accept Stanley's proposition.

Ethel helps Desiree into a hospital gown, and Desiree bids her to stay when the doctor arrives, nervous to be visiting a doctor for the first time. Desiree reveals that she was born in Philadelphia as Derek Dupree, having been mistaken for a boy until she was twelve, when she went through puberty and grew three breasts. Dr. Bonham reveals that she is 100% woman, not a hermaphrodite, and her penis is really an enlarged clitoris. He offers to remove her third breast and reduce the size of her clitoris so she can look normal, and mentions that she can still have children of her own.

Gloria instructs the gardeners to dig a six foot deep hole, despite her new garden requiring only 18 inches. Dandy apologizes for Dora's death. Gloria reveals that their family, Dandy's father included, were prone to insanity due to the inbreeding in their upper-class family to keep the family estate. She intends to find a safe way that he can indulge his violent impulses.

Elsa dresses for perfection for publicity photos for her television show. She is shocked when Stanley leaves with the twins in his car. He presents the conjoined bust of Bette and Dot Tattler to the American Morbidity Museum curator, who asks why Bette looks more dead. Stanley claims that Bette died first due to pneumonia, recalling how he got Bette to eat a poisoned pink cupcake, later on dying. Dot refuses to eat the cupcake, crying over her sister's death, and Stanley strangles her to death. It is later revealed to be another of Stanley's fantasies, as Dot refused cupcakes for both of them because they needed to keep their figure if they were to be on TV.

Dandy works out in the playroom while soliloquizing about wanting to be an actor, but realizing his potential as the perfect murderer. He finds his way into a gay bar, musing on a poster looking for Twisty's accomplice wearing a mask. There he finds Dell having a drink with an artist and prostitute named Andy. Dell is pressuring Andy to stay with him, but Andy brings him down to earth that he's still married. Dell starts to break down, and Andy reminds Dell that he is, in fact, in his office. Dell leaves, which is Dandy's cue to approach.

Elsa and the Tattlers discuss Stanley's plans and the promises he's made for each. Elsa tells them that as their new mentor, she has arranged for a seamstress to craft something for them the next day so they can look their best.

A drunken Dell returns home to his trailer. Desiree tells him about her visit with the doctor, and that she wants to try for a baby, but not with him. She reveals that Ethel told her that Dell's father was a lobster man, and that Jimmy is his son. She calls him a freak and leaves, saying that she will soon look normal and will be too much of a woman for him to handle. She takes her belongings and moves to Ethel's caravan.

Dandy leads a skeptical Andy into the bus. Dandy has paid Andy $100, but insists he is not gay. Dandy, in an effort to salvage the situation, offers that they strip naked facing away from each other. When Andy turns, Dandy is indeed clothed only in briefs— and Twisty's mask. Dandy stabs and begins to dismember a still living Andy, disposing of his limbs in a tub of acid. Andy awakes and begs for death, but Dandy elects simply to continue sawing off Andy's limbs.

Regina Ross, Dora's daughter, calls from the Barbizon after her mother missed their weekly phone call. Gloria initially puts her off, saying that Dora is too busy to call. As they are about to hang up, Gloria recalls that Regina used to live with them and played with Dandy, and asks what she thought about Gloria as a mother. Regina recalls that Gloria was never really there as a mother, and Gloria defends herself, saying she raised Dandy how she was raised growing up. She recalls a moment in Dandy's childhood when he was sick and called her to his room, and Gloria didn't know what to do and didn't want to get infected and sent his governess instead; following that incident, Dandy never called for her ever again. Regina uncomfortably hangs up. Dandy appears, in his underwear and covered in blood, much to Gloria's horror.

Dell visits the same doctor who examined Desiree. Dell threatens to harm his family and breaks his hands if he interferes with Desiree again.

Elsa drives away from Jupiter with the twins, taking them to the Mott Manor. She offers them to Gloria, who offered to buy them before to please Dandy.