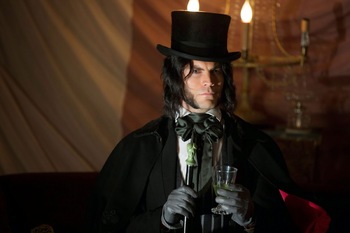 The freaks refuse to perform on Halloween due to an old carnie superstition. Jimmy is smitten with a woman claiming to be a fortune-teller. Ethel receives life changing news.

At the American Morbidity Museum, Dr Sylvester Mansfield and his assistant, Miss Rothschild await the appraisal of a medical specimen (reported to be a baby Sasquatch). They're instead accused of fraud. The museum is failing and desperate for new exhibits. The curator says she will take in any specimen as long as it's authentic. Learning that many exhibits were obtained from freak shows, Dr Mansfield decides to go to Florida with his assistant.

Trick-or-treaters are out in the neighbourhoods of West Palm Beach, Florida. A little girl named Jessie, who's clown phobia inspired her brother's costume, sees Twisty lurking nearby but her mother doesn't believe her. Jessie's mother and her friend notice the increase of children in the area and the curfew that's been placed on the neighbouring town of Jupiter.

Ethel finds out that she has cirrohsis of the liver and has roughly six months to a year to live, despite years of sobriety. The doctor advises her to keep her meat intake low and her abstinence from alcohol to continue. Ethel is moved by his compassion.

Jimmy, fresh from digging Meep's grave, enters the tent where his fellow freaks are celebrating the Halloween holiday. Dot berates them for their moods, stating that they should be dedicating the night to their fallen friend. Ethel then states that there will be no show that night, citing the legend of Edward Mordrake; a noble and talented Englishman with a whispering face on the back of his head. Despite his best efforts to kill it, it drove him mad. His family sent him to Bedlam where he escaped to a freak show. One Halloween night, he murdered his troupe and hanged himself all whilst his demon face smiled. The legend says that if a freak performs on Halloween night, he will appear and take a soul with him. Jimmy doesn't believe it but Ethel says it happened to the last troupe she was with. She begins drinking whilst Jimmy tries to unsuccessfully comfort her.

At Mott Manor, Dora the maid has been asked to dress up as Woody Woodpecker, Dandy's favourite character.

Edward Mordrake continues his search for a freak to add to his ghostly collection. Elsa tells the grisly story of her time in Germany. Jimmy and Maggie have a run in with Twisty the clown.

Edward Mordrake continues to search for a unique freak to add to his retinue, asking for their stories. Suzi tells of how she was abandoned by her parents at a children's home after she lost her legs and became a beggar when she left the home. She killed another beggar out of jealousy of his legs, cutting the back of one of his feet and accidentally stabbing his artery. Pepper and Salty are innocent, oblivious to his presence, and they are spared. Paul faced discrimination from Europe to America and decided to tattoo his body to become the monster people believed him to be. However, he did not tattoo his face because he knew he was handsome, and would have been successful if he had the same face and a normal body; Mordrake, who would have been a successful English heir had he not have a second face, sympathizes and spares him as well. Mordrake goes to Elsa's tent, but Elsa treats him with arrogance, believing him to be the falsely prophesied man who would revive her music career. He tells her to show her deformed legs, and the ghosts of his claimed victims pin her on her bed and rip off her prostheses, and asks for Elsa's story of her darkest hour.

Jimmy's motorcycle stalls and Maggie refuses to hide in the woods with him, fearing his intentions, but they hide behind the woods when an oncoming car passes by. Mike, the latest of Twisty's captives, fears death. Bonnie promises that they will escape, but worries about Corey, who is starving. Mike unties her legs and she escapes to the road, but Twisty tackles her and brings her back. Jimmy and Maggie witness this, and without a second thought, Jimmy tries to help.

Elsa recalls her life in Weimar back in 1932 as a dominatrix in a sex club. She would torture a soldier by making him sit on a toilet seat lined with nails, and became so famous that she was well-paid to let an audience watch. Mordrake is not pleased, insisting on hearing about her legs. Elsa recalls how, in Brandenburg, Elsa was drugged and tricked into doing a snuff film where her legs were amputated with a chainsaw. Her soldier client, who was in love with her, saved her as soon as the producers of the snuff film were gone, and she hated him for saving her life. Her film was distributed all over Germany and Austria, and while she was famous, she knew her career was over. The face says that she is the one. She says she is ready for him to take her, and he nearly stabs her, but he is stopped when he hears a toy piano playing.

Jimmy and Maggie track Twisty and unconscious Bonnie to the bus, where they are discovered by costumed Dandy. Dandy sets up a magic show for the prisoners, and Jimmy wakes up to find Maggie gagged and stuffed in the box, with Dandy planning to saw Maggie in half. Jimmy knocks Dandy over and saves her, and Twisty tells the audience to applaud. However, when Jimmy tells the prisoners to escape, Twisty subdues him and tries to stab him. Mordrake arrives to watch how the show ends.

Maggie leads the captives to the road while Maggie distracts Dandy, upset that his show and Halloween is ruined. Back at the bus, Twisty removes his mask and is able to tell Mordrake his story. He was a kind, albeit slow, special children's clown in 1943's Rusty Westchester's Travelling Carnival, but was hated by the dwarf carnies. During a campfire, they torment him, calling him stupid, and tell him that the kids have reported him and the police are coming to arrest him for molesting children, and he should run. Word of this spread, and he could not find carnival work, and made a living making toys from reclaimed items. He tried to sell them to Hanley's Toys, but the owner would have none. After rejection from a child and his mother, Hanley accuses him of being a child molester also. Full of fury, he wrecks a shelf and runs.

Distraught, Twisty attempted suicide by shotgun, but succeeded in blowing his jaw off instead. He evolved his clown persona, then thinking that he was rescuing the children from the freaks, believing all freaks to be stealing children from him. He sees himself as a good clown, going into a fury that scared Bonnie and Corey thinking it was funny, killing Corey's parents so he would give Corey candy and not let him do chores, and abducting Bonnie so she can be a "pretty baby sitter". He has "caused the demon to weep", according to Mordrake, as he cannot admit the error of his actions. Mordrake stabs him, and Twisty's ghost is welcomed as their new brother. The ghost rises, jaw once again whole, and the company departs. Dandy returns to find his slain mentor and claims his rictus mask for his own. He runs when sirens approach, leaving behind a bound and captive Jimmy.

The next morning, Maggie and Jimmy are questioned by the police. Jimmy has no idea it was Dandy, and the captives are still in a bad shape to be helpful. Maggie calls Jimmy the hero, and the detectives agree, but Jimmy still vows justice for Meep.

Maggie announces that the curfew has been lifted all thanks to Jimmy's heroism, kissing him on the cheek. Elsa and Jimmy, originally the non-believers of Edward Mordrake, discuss Mordrake and how he finally took his freak. Citizens of Jupiter arrive to thank Jimmy, and Mike's father personally thanks him, and the families slowly begin to accept the freaks. Elsa takes an opportunity to invite them all to a command performance under the big top (where they sell out the show). Bette and Dot are fuming that they are no longer to headline, but Stanley arrives claiming to be Richard Spencer, a Hollywood talent scout.

Dandy returns home to find an indignant Dora, and he responds to her by fatally slashing her throat. Amused by his final ability to kill, he removes the mask and laughs.