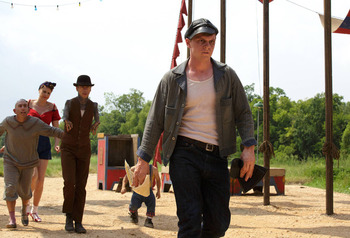 A citywide curfew threatens to shut down the freak show. A strong man from Ethel's past arrives at the camp. Gloria arranges a terrifying play date for Dandy. The Tattler twins reveal a talent that could knock Elsa from the spotlight.

At the carnival, the carnies do laundry and eat whilst listening to the radio. Jimmy adjusts the station to listen for news of the murders. A police detective is missing and the police arrive on the scene to question. Jimmy confirms with Paul that the body has been dealth with. Jimmy directs the police to Elsa's tent. The twins arrive and Dot confirms with the police that their mother was murdered matches the accounts of the other killings. The police leave.

In a toy store, a clerk calls after the owner. Some items are out of place. A toy robot tracks blood from the next room and Twisty the clown lurks in the shadows. The clerk follows the trail of blood to his employer's severed head. The killer clown sticks his shears through the clerk's neck from behind.

A record player is playing during dinner as another freak, Suzi skates her way down the table towards a sulky Jimmy. He snaps and storms out. He later apologises to Amazon Eve and Paul as they dig up the dismembered police officer's body with the intent to burn it. They must that 'freaks' are no different from normal people. Eve finds the officer's badge and gives it to Jimmy.

In the Mott Mansion, Gloria and Dandy have an equally sullen dinner. Dandy flicks his fork out of boredom and refuses the food he previously chose to eat. He fills his glass 'nipple bottle' with cognac. Gloria insists a female companion would do him good but all Dandy wants is to be an actor. She won't have it and Dandy storms off. The cook mentions that she found the remains of the neighbour's cat, implying Dandy is the culprit. Gloria won't believe it.

Ethel observes Dell, the strong man dragging a trailer behind him. Inside is Desiree, a triple-breasted woman who's unimpressed with the place. She and Dell had been in a Chicago troupe for the past six year but after Dell killed a young homosexual man, they left. In addition to her three breasts, Desiree also has full female genitalia as well as a penis. Dell asks if they can join the group. Elsa reads Dell's palms.

Gloria drives before encountering Twisty on the roadside. She asks him if he does private sessions. She also says that she will pay him handsomely if he agrees to cheer Dandy up.

Jimmy and Dandy talk. Dandy says that he's not infatuated with the twins but wishes to join the group. Jimmy says that without a deformity, he wouldn't do well. He also tells Dandy to count his blessings that he's normal. Dandy promises to show them that he really is a freak. He then retreats to his car before beating his head against the steering wheel. When he gets home, Gloria has a surprise for him. Twisty is closely examined by Dandy.

Desiree emerges from the trailer also observed by Ethel. Ethel takes the opportunity to visit Dell and tell him he's not welcome there. Jimmy is revealed to be their child together and that Dell tried to kill him as a baby. Dell claims that Elsa has deputised him as her second in command.

On the main stage, Desiree plays 'When I'm Calling You' and Bette proves she can't sing. Elsa insists that it doesn't matter as the girls have two heads. Jimmy suggests that Dot sings which she does so. Dell says it would be nice for the new matinee to get around the curfew. Elsa thinks that the evening is the best time for the show as it adds to the mystery. Dell insists the 'no lady is the boss of him' and nearly hits Jimmy before leaving.

Dandy tries to entertain Twisty with a marionette show. Twisty seems unamused and Dandy wants it to be Twisty's turn to entertain him. Dandy closely observes the clown, saying that he'll have to earn his keep to stay. The clown knocks him out and leaves.

Jimmy brings his carny friends to a diner, wanting to be served. Some disgusted patrons complain or leave. Paul grabs a plate a person left behind but a waitress refuses to let him keep it. Dell angrily hauls Jimmy out and beats him in the street, angry that he's given people a 'free show' to the freaks.

The clown's captives try to escape when Twisty returns to the bus, followed by Dandy. Twisty enters the coop and sits with the children, saying nothing. He pulls out the wind up toy and sets it towards the boy. The children don't laugh. Instead, Twisty pulls out a severed head. The girl hits him with a loose board and the kids try to escape. Twisty's mask has been dislodged to reveal he's missing his lower jaw. The girl collides with Dandy on the way out and he carries her back to the bus.

Back at the carnival, Jimmy returns sporting a black eye and calls Elsa. Dell is posting his matinee posters. Elsa thinks that it's a good thing that Dell is around. Jimmy then tells her that he disposed of the detective, impressing Elsa.

Dell does the intro with Meep biting the head off a live chicken followed by Dot singing with Bette as backing vocals. The elated crowd cheers and Elsa realises her dreams of stardom are being crushed.

The police return to the camp to search the place. They received an anonymous tip from Dell. Apparently, Dell was one step ahead and found the police badge. He then hid it underneath Meep's bed. They arrest Meep and throw him in a cell with a bunch of hardened criminals. They threaten to rip his fingers off one by one as Meep screams.

Elsa visits Bette, who's upset that she couldn't be the star her sister is. Elsa commiserates her and tells her that the crowd is fickle and will realise that she is the star soon. Dot sleep talks later that night. Elsa decides to sow seeds of distrust and tells Bette that she mustn't let her sister steal Bette's stardom. She slips a knife underneath the pillow.

A drunken Jimmy is woken up by Ethel. He's distraught by what happened to Meep and blames himself. Ethel assumes that the police where the ones who beat Jimmy up. She then tells Jimmy that Dell is bad news and to stay away from him. Jimmy intends to confess what happened with the detective to free Meep, confusing Ethel. As he leaves his tent, a truck dumps Meep's dead body. Jimmy wails as the others crowd around to comfort him.