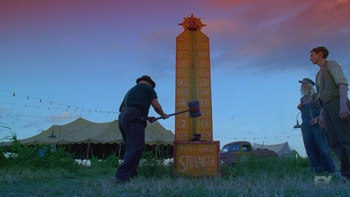 The women of the freak show rally against Del after his latest act of violence. A strange encounter with Dandy raises Jimmy's suspicions about the latest clown murders. New alliances and new freaks are formed.

At their manor, Dandy and Gloria Mott usher Jimmy into the playroom to see Bette and Dot. Jimmy tells the girls that they are nothing more than a curiosity to the Motts and pleads that they return to a community that can protect them. Gloria counters that they would never let any harm come to their expensive purchase. Bette challenges Jimmy with Dandy's lie that he was the true hero on Halloween night. This hatches in Jimmy an epiphany regarding the identity of Twisty's apprentice clown, and he insists that the twins leave with him immediately. Dandy shouts him down and assures Bette that he will prevent the surgery that she fears. Realizing that Dandy has read her diary, Dot demands they leave. Dandy avows his love for Bette and entreats her to stay. She opts for solidarity with her sister and they leave with Jimmy while Dandy seethes and Gloria watches a proverbially ticking bomb.

On the main stage, Jimmy counts down to a band of freaks including Amazon Eve, Ma Petite, and Toulouse who then launch into a rehearsal of Nirvana's "Come As You Are" as Elsa Mars looks on. In his trailer, a wounded Paul is nursed by Penny. At the gay bar High Noon, Dell asks after the gigolo Andy and the bartender's flippant answer earns him a beating. At a corner table, Stanley watches Dell storm out.

Upon the song's completion, Elsa begins to give her notes but Jimmy interrupts. He insists that he will change nothing and they engage in a power struggle. A mutiny is broiling as Elsa is confronted regarding her lies about the twins. Jimmy presents the girls to give their side of the story but Dot calls an audible and weaves a tale that protects Elsa's integrity while securing their position as the starring attraction.

Desiree ushers an ailing Ethel to an appointment with Dr. Bonham but find that his office has been closed for business. They enter anyway and find a woman packing the doctor's belongings who claims to be his daughter from Boston. She explains accusingly that her father blew his brains out after crushing his own fingers with a hammer and demands that they leave.

At the carnival, Stanley tries his hand at the Test Your Strength game. Seeing Dell pass, he challenges the strongman to show him how it's done in words loaded with homosexual innuendo. Dell, taking the mallet, warns him against trying his patience and rings the bell with ease. Stanley then reveals that he saw him at High Noon and after Maggie ensures his safety by making her presence known, Dell is ushered into the big top. At gunpoint, Stanley extorts Dell's help in procuring one of the freaks for sale.

In their underwear,Jimmy and Maggie cuddle in bed and she again implores him to run away with her. However, he feels obliged to remain and do something about Dandy lest he come after the twins or someone else.

Outside Eve's trailer, Dell pours chloroform over a rag and sneaks in to place it over the giant woman's mouth. She immediately wakes and a brutal combat ensues which ends with the bloodied man getting tossed out into the dirt. In the morning, Suzi and Ethel nurse Eve's knuckles in ice as Jimmy talks about reporting the incident to the police. Ethel insists that they handle matters in-house, intending to kill Dell. Jimmy wants to handle things more civilly, talking to the man and demanding he leave town. Ethel agrees to give him a chance to do it his way before they do it their way. Dell is showing off to the carnies at the Test Your Strength and Jimmy approaches to insist they talk privately. Noticing Stanley watching and that Jimmy's hands will serve the man's needs, he suggests that they go into town for a drink.

In Elsa's elegant tent, she and the twins share a drink and negotiate terms. The girls state that they have no intention of going to Hollywood and want to remain with a thirty-percent box office take. Elsa accuses them of blackmail and sarcastically compliments their growth since her rescue of them from the hospital.

At a local bar, Jimmy warns Dell of the lynch mob that is coming after him for what he did to Eve. Dell pawns it off as a he said/she said matter. Dell plies Jimmy with drinks but as they talk his murderous plans are postponed by the formulation of a father-son bond. Noticing the boy's impaired dexterity with his deformity-obscuring mittens, he insists that he remove them and promises to take on anyone who has a problem with that. Jimmy runs out to vomit in the alleyway and Dell follows, picking up a brick. As he creeps up for the kill, Jimmy reveals that he knows about their familial connection and their history of deformity. He implores Dell to admit it and he does, dropping his bludgeon for an embrace. Father and son drunkenly stumble back to the carnival grounds singing a bawdy song as the sun rises. Elsa chastises them for the noise and an angry Desiree approaches, warning Jimmy against Dell's corruption. Dell loudly announces that he is Jimmy's father and Elsa mockingly compliments his courage. After Dell puts Jimmy to bed he exits the trailer to find Stanley, who menacingly reminds him of his commitment.

Penny sneaks into her home hoping to avoid her father but he is waiting. He confronts her regarding her whereabouts and she admits to being with Paul and states her intention to return after she packs. He threatens that he will do anything to protect his reputation, though not being a murderer he has invited his friend Maurice to handle matters. He introduces a frightening man covered in ink. He is not a hitman but a sociopathic tattoo artist that disfigures Penny, rendered unconscious by alcohol, with reptilian face art and a forked tongue. A bozo haircut completes her metamorphosis into a freak. When she returns to Paul, he cries upon seeing the mutilation she has suffered.

The twins receive a makeover, with the biggest change being Bette's newly blonde hair. As the girl preens and proposes a new act, Elsa secretly slips a note to her sister. Later as Bette sleeps, Dot finds it to be a solicitation of alliance with Elsa. She delivers a response via Pepper. Her demand is Elsa's help in finding Dr. Oscar Sugar, the surgeon responsible for separating the Brodie twins.

Stanley eats dinner with Elsa in her tent. She confides her troubles with the twins and attempts to employ him in finding Dot's surgeon. He counters by proposing a more permanent solution. Ethel, serving dessert, overhears.

Dell enters the tent of a sleeping Ma Petite and presents her with the gift of a new dress. She gives him a grateful embrace and he squeezes the tiny woman until her body falls limp.