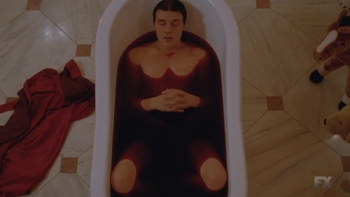 Gloria lights a cigarette while discussing Dandy's mental health with her analyst, Dr Feinbloom. She recalls his childhood of cruel indulgences, like cutting the hair of a young black girl (Regina?), killing a cat, etc. His childhood companion, the gardener's son, vanished one day in Dandy's company. He asks if there have been recent incidents, but she lies that it is just "an intuition".

Dell and Jimmy lead dogs in a search for Ma Petite, accompanied by Eve. Jimmy screams upon a revelation.

Ethel and Elsa pace the big top when the other carnies enter. Jimmy bears a cardboard box, which Elsa opens to her horror. The missing girl's bloody clothing is inside, but no body; Dell attributes a coyote or other animal. Elsa breaks down, but Ethel is suspicious and wary.

In her quarters, Elsa laments Ma Petite, but notices Ethel is not so mournful. Ethel tells her longtime friend that she almost believed Elsa's crocodile tears were sincere. Elsa slaps her in response. Ethel retorts that all Elsa cares about is the roar of the crowd and hates someone stealing her spotlight. Elsa blames Ethel's behavior on drinking and orders her out. Fourteen years of friendship and history have made Ethel realize that she dreads her best friend. Elsa spurns Ethel's accusations of murder, overturning her table. Ethel reminds Elsa that she's not their savior, she's their surrogate mother. Further, Ethel overheard Elsa's cold conspiracy with Stanley to murder the twins, killing any feelings the bearded lady had for her. Elsa wants to bring the twins for testimony, but Ethel has sent them to safety.

Ethel shoots Elsa in one of her legs, leaving a hole through the prosthetic. Elsa chuckles at the incredulous Ethel while telling the story of how she became a freak.

Immediately after her amputation incident, her lovelorn soldier brought her to Massimo Dolcefino, an artisan prosthetist in wartime and a cinematic prop-maker thereafter. Ethel asks a shamed Elsa why she never revealed this, but still intends to halt Elsa's callous methods. Elsa thinks that Ethel intends to kill her, but Ethel instead intends to kill herself, feeling that she has nothing to live for. Quickly their interplay shows changes in plans: Elsa intends to kill Ethel (seemingly by poisoning a drink) before the bearded woman can change her mind, and Ethel (sensing this) turns the gun on her onetime friend. In fact, Elsa expertly throws a knife into her would-be killer's forehead. Elsa looks on in horror at her own murderous actions.

Dell leads Jimmy to the big top where Maggie sobs within, ostensibly "found" by "Richard Spencer" by the Ferris wheel. She claims she was picking flowers for Ma Petite's grave when a speeding car collided with a nearby tree with Ethel behind the wheel. All assembled are further shocked when Maggie declares it suicide. Jimmy wonders why his mother would do such a thing, and Desiree reveals Ethel's secret terminal cancer. Dell confirms this, and Elsa demands to see the site of the accident.

In the wreckage, Desiree wonders why Ethel's head is missing while Stanley and Maggie exchange knowing looks. He finds a bloody chain nearby tethered to a tree and explains the beheading. In fact, Elsa and Stanley argued about this point while staging the scene; Elsa thinks it ridiculous, but Stanley convinces her that the theatrical positioning will cover "a host of sins, all of them yours". She feigned concern, but he called her on her act, saying it is to protect her own self-interests. He convinces her that this is necessary for her career. Jimmy consoles Elsa while she sobs over the body.

At Mott Manor, Gloria calls after Dandy with a gift. He presents Regina as a visitor looking for her mother. Dandy says that Regina's questions should be directed at Gloria, since she was the last to see Dora. Gloria explains that Dora just left to purchase a squash from a distant farmer's market and some auction items. Regina says she will wait and they play a board game.

Jimmy eulogizes his fallen mother at a nighttime burial with an Emily Dickinson quote. As most assembled depart, Desiree privately talks to Eve, Penny, and Suzi about her unexpected friendship with Ethel. Desiree is inspired by Ethel's survivor nature and strength. Penny commiserates, reminded of her father's mutilation of her. In Ethel's name, Desiree calls for retribution against Penny's father and the ladies volunteer.

The next day, Dandy responds to Rorshach's inkblots presented by Feinbloom. Each one is a more grisly and visceral response than the last. He was told that this was an intelligence test, and is impatient for the results. The analyst wants regular sessions, and Dandy retorts with a question about the cannibals of Papua New Guinea and whether or not carnal consumption can harness the power of a soul and whether a bath in blood would suffice.

He returns home to confront Gloria about sending him to the analyst as if he were mentally ill. Regina has returned and says that she will go to the police if Dora does not return by the following night. After she leaves, Dandy bargains that he will attend sessions with Feinbloom for a month if Gloria will kill Regina. He contends that Regina sees through Gloria's clumsy lies and that they will both burn in the electric chair if the loose end is not tied up.

Elsa visits a wellness center where Barbara, an Upper-East-side Manhattanite debutante is on a shimmy machine for weight loss. Elsa pitches her on joining the show, where her obesity will be cherished. Meanwhile, the ladies vengeance party gathers supplies in the caravan. Penny nervously says that she will take it from there. She is thankful they want to help, but doesn't think they should get involved. They leave a soup on simmer and head to her father's house.

Suzi sneaks in through a window and lets the others in. Hearing the noise downstairs, he patrols with a shotgun. Encountering his daughter on the mezzanine, he wonders how she got in after he'd had the locks changed. The others knock him out and kidnap him. Under the big top, Jimmy mourns drunkenly as Elsa enters with dinner borne by Salty and Pepper. Elsa presents Barbara, now known as "Ima Wiggles" to him. Named after the fattest woman of all time, dinner is hers for the taking. Jimmy argues with Elsa that this family is broken and dying before he storms off.

The raiding party has Penny's father disrobed and tied to a chair. Desiree and Eve are about to tar and feather him, then cut off his penis and toss him into the river. Penny calls to intervene, but insists she should do this herself. Together, she and Eve pour the hot tar on him and the feathers fly. Moments before the severance is to take place, Maggie runs in and reasons that this is not the way to obtain justice. Desiree says the young woman is out of her depth and her element, not one of them, and that she should stay out of this. Maggie counters with a caution that this action will send them all to jail. Penny grabs the knife and claims her identity as "The Astounding Lizard Girl", and says that he will live only because she says so unless he comes near any of them again. Desiree calls for him to be dragged to the edge of camp where he'll wander home on his own.

Gloria tells Feinbloom that she has booked passage on the Queen Mary for Dandy, over his advice of temporary commitment. She tells him that his services will no longer be required. Dandy lurks behind her, observing. He throws her own words back at her. Dora told him when he was five that his father was his mother's second cousin and a murderer of young girls. He responds that he won't be going to Europe as she's planned. She turns the tables that she is the one that intends to leave, as she can take no more of his predilections. He shows the gun in his hand, ready to shoot himself to end things. She bids that he shouldn't, as she couldn't go on if he killed himself. He agrees, and shoots her in the forehead. He cries a single tear and sighs.

Maggie wakes Jimmy after his drunken night, wondering how he is to lead them after his behaviour. She reminds him of their plan to escape and that they can't accomplish that if he's a drunk. He refuses to compartmentalize his grief, and he sends her away. As she leaves, Jimmy has new found eyes for Barbara / Ima and collapses sobbing into her bosom. Dandy walks through his playroom to a clawfoot tub prepared at the edge, where he disrobes and literally bathes in his mother's blood.