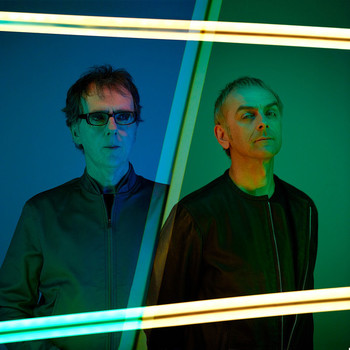 Underworld is a British electronic group featuring duo Karl Hyde and Rick Smith since around 1987. The band's music ranges from House, Trance, electro-pop and pretty much everything in between. Hyde and Smith had worked together in a bunch on New Wave and synthpop bands including The Screen Gemz and Freur, before moving on to their own funkier brand of synthpop under the name Underworld. This phase of their career, now called "Underworld Mk1", produced two decent albums with moderate chart success, even opening for Eurythmics on a 1989 tour.

By the start of The '90s, Smith began collaborating by a young DJ named Darren Emerson, who was keen on working in a professional studio; Smith in turn wanted to feed his interest in UK club culture. Smith introduced Emerson to Hyde and the rest is history. Underworld returned in 1992 with a string of hit acid house and techno singles — some under the name Lemon Interrupt — before releasing their third album, 1994's dubnobasswithmyheadman. It is this phase, dubbed "Underworld Mk2", that the band is most famous for, releasing two additional, highly acclaimed albums and a plethora of singles, exploring breakbeat, trance and hardcore techno. Two of their most famous songs come from this period: "Dark and Long (Dark Train)" and "Born Slippy .NUXX", two songs which propelled Underworld into international fame after their use in Trainspotting.

Emerson left Underworld in 2001 to focus on his own recordings and record label management, leaving Underworld as a duo. Smith and Hyde have continued to record under the moniker "Underworld Mk3", releasing (as of 2016) four additional albums and numerous EPs of new material. Underworld also directed the music for the opening ceremony of the 2012 Olympic Games in London. They reside in Essex, UK and are part of the art collective Tomato, which has provided all of the artwork and photography for their albums.

Underworld's music has been featured in numerous films and television shows, and the band have enjoyed a special relationship with director Danny Boyle, who has used their music in nearly all of his films — to the point where they have written exclusive songs for them. The duo have also composed film scores, including those for Breaking and Entering and Sunshine.