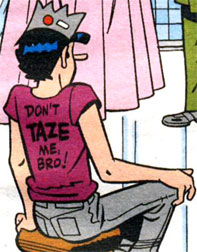 The perils of this trope: how many of you know what the phrase on Jughead's shirt means?

"At only a year and a half since the event being referenced, this is the most current pop-culture reference that Archie Comics have ever made, beating out the same issue's American Idol joke by a good five years."
— Chris's Invincible Super-Blog

Suppose you've got yourself a Long Runner. And while your Long Runner hasn't really wavered in popularity, not significantly, you still want to connect with the youth of today. Perhaps you'd also like to comment on current pop-culture and political events.

The parent trope of both Totally Radical and Fad Super, this happens when a series that is gettin' old decides to make an attempt to stay current. Of-the-moment pop-culture references (that usually end up dated by the time the work of fiction makes its premiere) are certainly most common. Inserting or referencing memes is a common variant of this trope, especially if the meme is already way past its prime at that time the writer just decided to use it. The writers might also decide to change a character radically or create an "updated" Expy of an older character. A number of times a character has been made Darker and Edgier easily fit the bill. Another popular tactic is to make the character suddenly become a member of a newly-emerged subculture, fandom or similar group. The result, especially if the writer is not part of said subculture and doesn't do the research, is often laughably embarrassing instead of the bold new direction for which the producers were hoping.

This often heralds the beginning of a Dork Age. Can very often result in an Unintentional Period Piece since "current events" are usually short-lived, and worse if the older parts of the franchise that didn't try this still look fresh. Due to Animation Lead Time this can be especially common in animated works, as a long production time means you may miss the relevance window by a number of years.

See also Popularity Polynomial, Mascot with Attitude, Discredited Meme, Follow the Leader, Two Decades Behind, Long-Runner Tech Marches On, Future Society, Present Values, Jumping the Shark, Network Decay, Magazine Decay, Jive Turkey, Pretty Fly for a White Guy, and more than a few Scrappies and cases of Misaimed Marketing. Contrast Growing with the Audience. Its inversions are Disco Dan, Anyone Remember Pogs?, and "Mister Sandman" Sequence, which are dated references to show how something isn't hip and modern (or in the former two's cases, irrelevant).

Tropes Are Tools aside, this is usually a kind of writing pitfall, especially if you're a TV or movie writer trying to make your current long-running show more hip or trying to revive a long-dead franchise for a new generation. On the other hand, sometimes it works, and, if the alternative is leaving your story looking decades out-of-date... The trick is to update the right things, update them the right way, and leave the timeless things that people liked about the franchise in the first place alone.