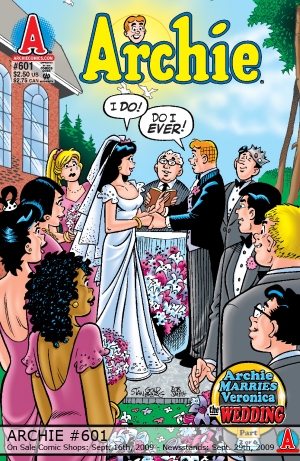 Sorry, Betty.
"Nothing solves everything forever like a wedding!"
— Marge, The Simpsons

Celebrating two people's lifelong commitment to each other? Aw, the love… the peace… the joy… the groom who panics at the last minute, leaving his friends desperately searching for him as they try to keep this under wraps… the Bridezilla who has a conniption fit over a single misplaced frill… the Beloved Smother who insists on hovering over every single aspect of the ceremony… the drunken priest… the awkward moment at "Speak Now or Forever Hold Your Peace" when the long-forgotten Love Interest says "I object!"… the surprise attack by the bride's and/or groom's enemies... some day we'll look back at this and laugh. And laugh. And laugh. Hoooo boy.

These are tropes have been subverted to the point of destruction. Yet, they aren't really discredited, due to Rule of Funny and Rule of Drama. And they can be played straight, too… you're just as likely to find a Heartwarming Moment of one sort or another at the Wedding Day as a series of hilarious mishaps. Though if nothing unusual happens, we probably won't see it.

There is also the Off-Again/On-Again wedding. But then, that one dates back all the way to William Shakespeare and Much Ado About Nothing.

Specific variants: Bridezilla, Citizenship Marriage, Speak Now or Forever Hold Your Peace, Runaway Bride, Wedding Deadline, Wedding Smashers. Often a good opportunity for a reveal of an Embarrassing Middle Name (we're looking at you, Rodney Charlton Trotter), and you're likely to find at least one Fairytale Wedding Dress floating around.

Compare The "Fun" in "Funeral".

In Season 8 "Something Old, Something New, Something Bob Caters for You", the Belchers witness why you should never have a wedding outside when it's very windy, among other things.

In Season 8 "Something Old, Something New, Something Bob Caters for You", the Belchers witness why you should never have a wedding outside when it's very windy, among other things.