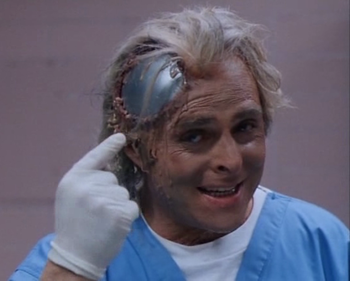 He's a metal head, but not a metalhead.
Advertisement:

One good way to protect your hat (and, in turn, your head) is filling it with something dense. Or perhaps you've got a steel plate in your skull from a long-ago injury, that happens to be just what's needed to deflect a bullet or psychic attack.

This trope contains marked spoilers due to the Unspoken Plan Guarantee.