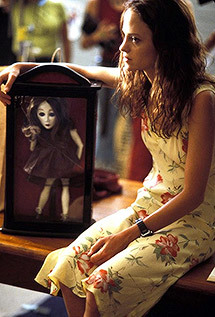 May and her closest friend. She'll make more.
"You are welcome to use whatever you find, even the doll, should it please you."
— Gehrman, Bloodborne
Advertisement:

Dolls. Everyone has played with at least one in their lifetime, and many enjoy collecting them well into adulthood. However, there's something a bit... upsetting about a large collection of dolls. Maybe they're a bit too human, or how they lay so deathly still in their pretty dresses, with their glassy unblinking eyes... Brrr!

Which is why just about every horror, suspense and mystery series that runs for long enough will have a doll-themed episode. This episode will inevitably be incredibly creepy and unusually upsetting. If the show is already terrifying, then this episode will inevitably one-up itself. This may have to do with the perversion of childhood innocence, though many people think dolls are just inherently creepy.

This trope tends to manifest in a number of common ways, many of which can combine with each other:

The dollmaker or collector will usually be a madman or woman who has taken a shine to the protagonists either as "something" to add to their collection, potential parts for their latest creation, or threats to themselves and their beloved collection, making them try to capture or kill them.