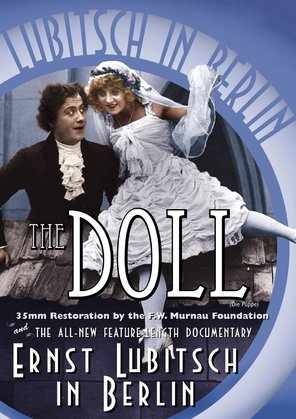 Four amusing acts from the toy box.
Lancelot: "I will not marry a woman!"
Monk: "You don't need to marry a woman: you can marry a doll!"

Baron Chantarelle (Max Kronert) is dying. Fortunately, his line rests secure in the hands of his nephew Lancelot (Hermann Thimig), whom he has promised will inherit his fortune. However, he will only do so if Lancelot - who just Cannot Talk to Women - gets married. Despaired by this dilemma, Lancelot flees into a cloister to get away from his Unwanted Harem of suitors. He is approached by the monks, who seem to have the perfect solution to his troubles: buy a Robot Girl from the toymaker Hilarius (Victor Janson) and present her as his bride.

Meanwhile, Hilarius' apprentice (Gerhard Ritterband) has run into a few problems of his own. The dancing doll made by the toymaker in his daugther Ossi's image has been damaged, and Hilarius will surely punish him if he finds out. Fortunately, Ossi (Ossi Oswalda) has agreed to stand in for the automaton while it is repaired.

What Could Possibly Go Wrong??

The plot was adapted from the story Milner, by Ernst Lubitsch and Hanns Kräly, which was based on the French comic operas La poupée de Nuremberg, (The Nuremberg Doll) and La poupée, (The Doll), both loosely inspired by the E. T. A. Hoffmann story The Sandman. The film was one of many collaborations between Ernst Lubitsch and Ossi Oswalda, and was generally well recieved, but got some flack for its' portrayal of Catholicism. Lubitsch himself would later call it "one of the most imaginative [films] that [he had] ever made."

No relation to the Glowacki novel.