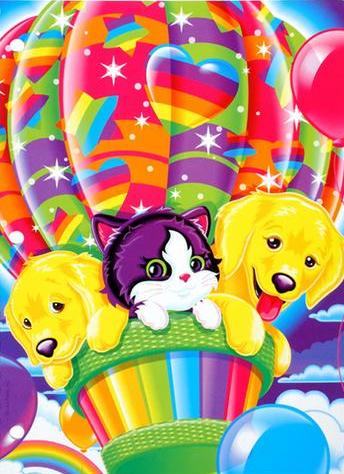 Lisa Frank, converting your monitor to rainbows, glitter, and balloons.
"Butterfly kisses! I can't take it! It's too cute! It's... it's DISGUSTING!"
— Plankton, SpongeBob SquarePants, "Walking Small"

This is an audience reaction to works that are strongly attempting to be kid-friendly— using almost all the tropes of cuteness and idealism, like there's some kind of checklist. 'Saccharine

' is the watchword. Viewers react to this with anything ranging from cutesy cuddling to violent revulsion. Always, there will be fun, colorful settings, Narm or generally hammy voice acting, an aversion to anything resembling death except for that one final and dramatic battle (if there are any battles to begin with), and no matter the situation, if you have friends, you will win because you can only win with friends. The sun shines a lot, and when it's night, the moon is full and bright. Also, there is smiling. Tons of smiling. Even when it's not appropriate, there is smiling. The Big Bad (if the show even has any villains in it at all) is Obviously Evil with no attempt to look otherwise, and flips between being born evil (maybe even worse) or redeemable, depending on the story. Chances are, he/she may not like it there.

Keep in mind that levity and sweetness are not necessarily bad. With proper usage, it may result in an enjoyable series where the cuteness is somehow justified or just part of the environment. When it monopolizes the series, or puts being adorable ahead of things like actual plots or likeable characters, then it becomes a problem. Cute in and of itself isn't wrong, but given an audience's general conditioning to the notion that Silly Rabbit, Idealism Is for Kids!, that Real Men Hate Sugar and Real Women Don't Wear Dresses (a side effect of targeting masculine elements towards women as much as men), even this wiki has something of an aversion to cuteness as an entity as the incredibly long list of examples below attest. This cultural reaction is also one of the core reasons why American Kirby Is Hardcore.

Not to be confused with Sweet Tooth or Sugar Bowl settings in general, as this is an Audience Reaction. Use caution when mixing with Gorn and Crapsack World as Grotesque Cuteness or Wide Eyed Idealism may result, respectively. Repeated consumption of this product may result in becoming a Glurge Addict. Be aware that excessive cheerfulness can be used to disguise a Crapsaccharine World. Also not to be confused with the real-life Types 1 and 2 diabetes, which are definitely not at all cute, sweet, or adorable!

See also Super-Cute Superpowers. A Crapsaccharine World is often deliberately designed to cause this. Contrast with Testosterone Poisoning (for this reaction's opposite on the stereotypical gender roles scale) and Darkness-Induced Audience Apathy (for its opposite on the Sliding Scale of Idealism vs. Cynicism).